Share All sharing options for: Game Thread: Knicks vs. Pacers- 11/4/09 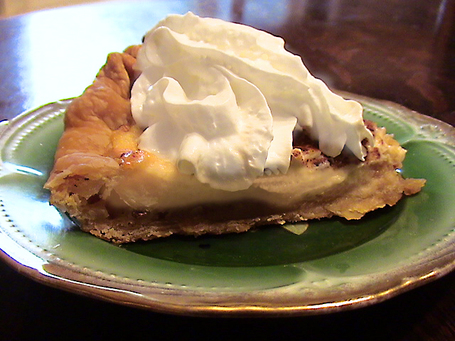 Any of y'all ever had Hoosier Pie before? Shit looks delicious.
The Knicks take on the Pacers tonight in a battle of two basement-dwelling teams. The Pacers actually haven't won, with Danny Granger struggling and Knick-killer Troy Murphy recently injured. It'd be in the Knicks' best interest to win this game, but you really never know. Also, watch out for that Mike Dunleavy. Guy unleashes his inner-Jordan when he's facing New York.

I'm gonna watch the tape of this game rather than the live event, but those of you following the broadcast at 7:30 EST can and should comment along in the space below. If one of you would like to recap tonight's events, let me know via email. If not, I'll be back tonight to watch and provide my own recap. Go Knicks!
Check out Indy Cornrows for Pacers coverage, and ask Tom if he's got any Hoosier Pie for me while you're there. Pause?