Share All sharing options for: Game Thread: Knicks at Clippers- 2/11/09 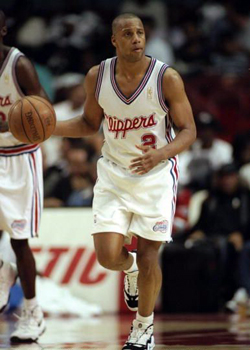 It's a shame the Knicks don't play the Clippers more. They're a franchise with a long, storied list of silly 90's players whose pictures I want to post. Can you name this one?

Anyway, the beat-up Knicks get no respite following last night's embarassment in Oakland. Instead, they head south to face the Clippers. I know what you're thinking. Tonight's the night that Mardy Collins takes his bloody revenge on Knick fans for our 3 seasons of giving him grief. As it turns out, we shouldn't be seeing Mardy until late March, when these two teams next meet. Collins has an injured calf, and is expected to be out until at least the All-Star break. So, who else do the Clips have? Well, as you might remember, Zach Randolph was a throw-in in that Tim Thomas deal. He's putting up good numbers in L.A., and will probably look to score big against his old teammates. Another old friend, Marcus Camby, is guaranteed to swat some shots and give our puny front line a headache with his size. Meanwhile, Baron Davis is a long-time Knick-killer, and Eric Gordon's got the skills to give Donnie Walsh sickening draft night flashbacks.

All of that said, the Knicks have no choice but to win tonight if they want to still have fans after the All-Star break. A number of us are ready to write off the season after last night's humiliation, and tonight could be the final nail in the coffin if the Knicks don't step up. I have no word on whether Quentin Richardson or Tim Thomas will play, though I'd expect Tim to truck through whatever's bothering him and sink some threes over his old squad. Keep an eye on Chris Duhon as well. Not only is he coming off the flu, but his ankle seemed to flare up last night.

Injuries or not, New York simply must execute this evening. Gametime's 10:30 EST, and if you're watching, make sure to come by and share your in-game comments and Mardy Collins memories. Also stop by Clips Nation for fantastic L.A. analysis.

Update: The Clips also have Fred Jones. Damn, that's a lot of former Knicks. No wonder they suck.

Another update: Did you know the Knicks haven't won on the road against the Clippers since March of 1998? There's more than one losing trend to be bucked this evening, y'all.