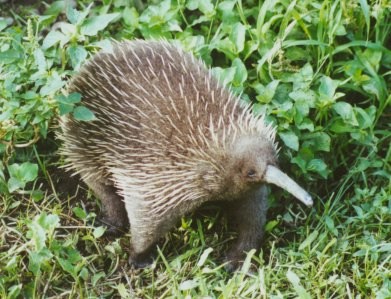 I can't bring myself to fully recap last night's game. There isn't much to say. The Knicks got completely humiliated, and Al Harrington played the role of scapegoat big time. For those of you who missed out, not only did Big Al miss repeatedly when it counted, but he got called for a technical late in the game. After successfully dunking to put the Knicks up three with less than a minute to go, Harrington pulled himself up on the rim and slapped the backboard with two hands. Like the rule or not, officials are required to call that a technical. There's no arguing that glass-slapping's punishable, and Al completely lost his mind. Anyway, on to other people's stuff:

- Question from last night: Is Steve Novak Jewish, at least in part? I don't know a single Novak who isn't. I'd feel a lot better about his 6-8 three-point shooting performance if I knew he honed his skills in JCC competition. (Update: My research tells me that the surname Novak could easily be of basic Czech or Slovenian origin. You never know, though.)

- WWOD? coins the term "crotch-kick loss" for what happened in L.A. It's like a stomach-punch, but everybody's laughing at you.

- Some, including some who know their stuff see Nate Robinson's performance last night as one more sign that Chris Duhon isn't as valuable as we think. I would've been more convinced if Nate had kept up his fine play down the stretch.

- Via TKB, Frank Isola sneaks a peek at Donnie Walsh chatting with Anthony Randolph's soon-to-be agent. That kind of shot-blocking could do wonders for the Knicks right now.

- Another note from last night that would've been in a recap: My girlfriend had a look at Wilson Chandler and remarked "If you're gonna have neck tattoos, you either have to wear turtlenecks or play basketball".

- The Knicks as a team have off til Tuesday, but don't forget that we'll be represented in Phoenix this weekend. Wilson Chandler will be in action on Friday in the Rookie-Sophomore Game, while Nate's one of four participants in Saturday night's Dunk Contest. Both will be blogged, so don't forget to stop by.

Male echidnas have four-headed penises. I'll leave you with that.