Hey, what's Dan Grunfeld up to these days?

Share All sharing options for: Hey, what's Dan Grunfeld up to these days? 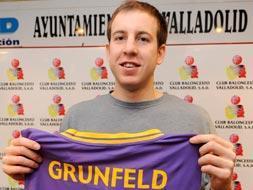 The other night my girlfriend asked, "Hey, whatever happened to that white guy from training camp who was so excited to be on YouTube?". Good question. I hadn't really thought about Dan Grunfeld since October. So, in case you're wondering, here's what our old training camp buddy is up to. From his Wiki page:

In January 2009 he received the Romanian citizenship in order to be eligible for playing for the Romania national basketball team.

Further research (and my limited Spanish knowledge) reveals that Grunfeld has signed with CB Valladolid, a Spanish club with the ugliest jerseys I've ever seen. Even so, I'm proud to announce that CB Valladolid has been adopted as P&T's official FEB basketball team.

Dan, if you're out there, send P&T a line and let us know how you're doing. New York misses you.