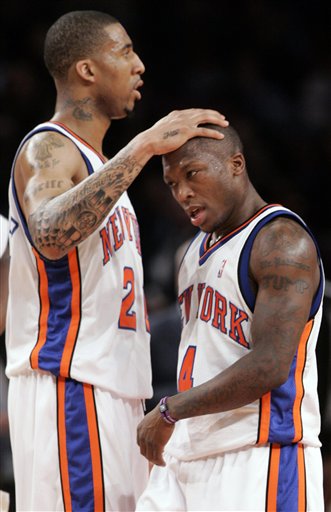 - Everything should be prefaced by noting that the Spurs were without Manu Ginobili. I'm not entirely sure how he would've changed the outcome of this one. Would he have taken makes away from Tim Duncan (8-16) or misses away from Tony Parker (5-20) and Mike Finley (4-13)? Doesn't matter. The Knicks were without Jerome James, so it's even.

- Speaking of Manu, Gus Johnson committed the cardinal sin of sports commentary by announcing that Ginobili "had an ankle". That makes me picture a grinning Manu holding a severed human ankle in two hands with the caption "I HAZ AN ANKLE".

- With Eva Longoria in attendance, Gus was compelled to proclaim his love for Desperate Housewives, adding that the housewives are "a tricky bunch".

- We give David Lee a lot of grief for his defense, but let's all tip our hats for a workmanlike effort against one of the most indefensible big men in the NBA. Lee held his own against Duncan- muscling him off the bal, forcing 7 turnovers and making him take off-balance shots (which, unfortunately, he hits with ease). Lee fouled out in 30 minutes, but at least 3 of those 6 were superstar calls. One of the fouls was actually Dave complaining about a non-call on the other end and gesturing wildly, only to whack Timmeh in the face with one dismayed arm. Anyway, props to Lee for solid D (check that hot fire), as well as his usual effort (13 and 12) on offense.

- Finally, they're playing Paul Simon's "You Can Call Me Al" after Harrington scores. It was only a matter of time. Oh, also, for those of you needing an update on Al's newfound streak of brainlessness, he went 3-11 from the field and had 4 turnovers. One of those turnovers was a traveling violation in which he caught a pass and simply began to walk towards the rim. Good news is he got to the line (but shot 5-8) and hit a big layup down the stretch (but blew another one).  In summary, it wasn't as bad as Wednesday night, but Al's still on the path to getting himself right.

- Anthony Mason sat courtside and was the subject of an Al Trautwig interview that may win an Emmy. It was pretty much Traut asking a question, followed by Mase cackling wildly, followed by some answer in the form of gurgling. I was able to discern that Mase would like to be part of the Knick coaching staff or front office someday, which is the best news I've ever heard.

- Danilo Gallinari shouldn't have to match up with guards. You would also look bad on defense if you were 7 feet tall and had to chase Roger Mason in circles.

- David Lee seems to have a tattoo peeking out from either side of the back of his jersey. Any idea what it is? What if Lee has gigantic angel wings hidden under his uniform? We need to come to a consensus on how we're going to feel about that as a community.

- How do Tony Parker and Tim Duncan keep their hair the way they do? Do they both go bald every morning, but have extremely fast-growing follicles, thus resulting in a thin head-beard shadow for every game? Whatever it is, I'd like to know the secret of the perma-stubble. It's not fair that only those two can look so artfully scruffy.

- Tonight's unsung hero was Chris Duhon. His performance was overshadowed by Nate's (more on that later), but Chris answered our collective call for aggressiveness. Du's shot chart tells the story. He got to the rim for 5 of his 9 shot attempts as well as dishing out 8 assists. Duhon's last on the team in plus/minus (mostly because he leads a 22-30 team in minutes, but whatever), but posted a +8 this evening. Why? Because he was aggressive, that's why.

- Kurt Thomas fell and cut his mouth at one point, which led to the rather appropriate image of Thomas staring madly into space while licking fresh blood off his lips. I miss Kurt.

- The Spurs must have gigantic feet. The Knicks caught a break by having a number of apparent three-pointers called as twos because of a toe touching the line. There were three such occurences by my count, including one big one on a Roger Mason jumper with 30 seconds left. I know it's gruesome, but Pop's gotta consider team foot binding, right? 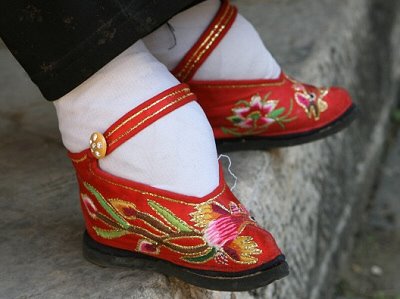 The difference between a Spur win and an overtime loss.

- Since this is a hot topic of late, credit D'Antoni and all five active Knicks with recognizing that there was a foul to give. After Nate hit a layup to tie the game with 20 seconds remaining, the Spurs opted to skip a timeout and go directly for the win. Coach Mike nearly pooped his pants signaling to everyone that they had a free foul, and got his point across. Lee used his sixth foul to nip a Tony Parker drive in the bud with just 3 seconds remaining. This set up a Tim Duncan turnaround off an inbound that rimmed out as time expired. Granted, he hits that shot 19 times out of 20, but I like to think the basketball gods smiled upon New York for proper defensive execution in the clutch.

- Lastly, the largest helping of props is reserved for Nate Robinson, who electrified the Garden with 32-point, 10-rebound, 3-assist performance. Nate went 13-23, including 4-8 from downtown and 3-5 in overtime. The dunk contest champ bum-rushed the rim with abandon and snatched a couple of meaningful rebounds away from the trees around the basket. The Knicks offense excelled tonight because Nate and Duhon knew when to take over.

And that is all. Stealing an overtime win from one of the league's crunchtime best is an excellent way to kick off the home stretch and bid good riddance to a losing streak. Hopefully New York can ride this wave of good feelings into this weekend, which features a home-and-home with the new-look Toronto Raptors. For now, things are finally looking up.