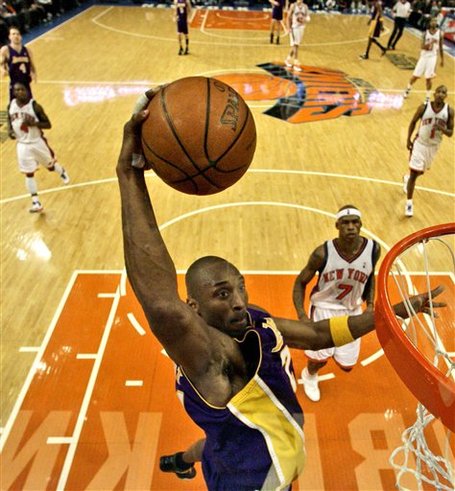 Guarding Kobe Bryant is essentially a dice roll. On a given night, you could see teammate Kobe, cold Kobe, clutch Kobe, or- when the stars and planets align themselves just so- legendary Kobe. Tonight was one of those nights. In the company of 20,000 spectators and 9 other players, Kobe Bryant was completely alone. He shut out teammates and defenders alike and took a 37-minute basketball solo. All told, it was 61 points on 19-31 shooting, and one of the greatest individual performances the Garden has ever seen. That doesn't mean I'm letting the Knicks off the hook, though. I watched only the second half, but here's what I've got:

- The Lakers made it clear that their gameplan was to pack the paint and challenge the Knicks to hit outside shots. New York responded by taking a giant dump, shooting 7-27 from downtown- including a 1-6 showing by Duhon and 0-4 by Nate Robinson.

- More on those two...Duhon really picked the wrong night to ease up on offense. Du registered 9 assists, but neglected to create his own shot off the dribble and shot only 3-9. Such complacency affected not only Duhon's offensive line, but those of the Knick forwards. Lee and Harrington repeatedly got their shots blocked under the basket, which was at least in part because Du failed to keep the Laker big men honest (and partly because both of them are 6'9'' tops, but even so...).

- It's much too soon to say he's back in a slump, but Nate Robinson really looked like his mid-January self in this one. The balance and follow-through on everything from threes to layups looked just a bit off, and he repeatedly rimmed out makeable attempts.

- Kobe's virtuoso performance over-shadowed sheer dominance by Pau Gasol, who dropped 31, 14, and 5 on the Knick midgets.

- Hats off to Wilson Chandler and Jared Jeffries who, despite all their athleticism, are completely ill-equipped to guard Kobe Bryant. Both of them did the best they could to force tough shots without fouling, but it takes some veteran chutzpah to even distract Kobe, particularly on a night like this. I can't speak for the first half, but Wil and Jared did their darndest in the second.

- David Lee: 22 and 12. Al Harrington handled the ball a bit too much for my liking, but got to the line and made his field goals for 24 points, which is hard to argue.

- I understand that New York's a melting pot for a variety of cultures and basketball fans alike, but hearing a Garden crowd chant "MVP!" for Bryant was pretty irritating, and I'm not even a Kobe hater. I mentioned in the game thread that I wished just for a second that Isiah was still coach, because I'm sure he would've employed Anthony Roberson to clothesline Kobe when he was still cavorting with less than 3 minutes left. That's obviously an overreaction, but a good, hard foul would've been nice. You know, not fatal or anything. Maybe knock a couple teeth out or paralyze him from the waist down. Nothing too harsh. 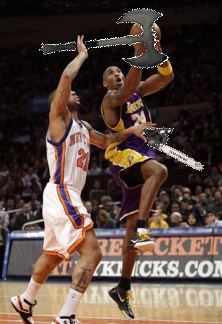 In short, the Knicks were overmatched in this one. They lack both the size to handle Pau Gasol and the weaponry necessary to stop Kobe Bryant when he's in the zone. That said, New York's guard play and shooting were sub-par on a night when there was little room for error. It'll take near-perfection to steal a win this week, and the Knicks fell short tonight. This is why taking care of business against the Hawks and Pacers was so important. It's never fun to lose, but we'll live to see another day. Cavs on Wednesday.

P.S. Wow, I really took Powerpoint-as-Photoshop sloppiness to a new level on that one. I actually just got me some Photoshop for research experiment purposes, so I may put it to use once I figure it out. Although I do think that the god-awful Powerpoint pictures have a certain charm.