Share All sharing options for: Game Thread: Knicks vs. Raptors- 2/20/08 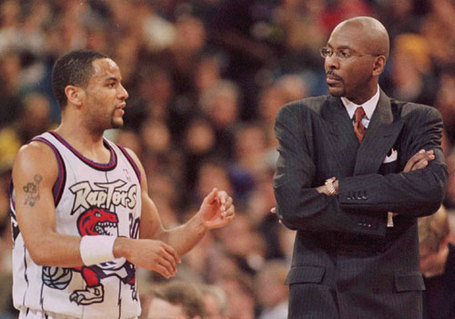 Good evening urrybody. Tonight marks the first matchup between the Knicks and Raptors this season. In preparation, I traded a few answers and questions with Romy of HoopHeadsNorth.com. You can check out my answers to his questions over there.

P&T: Do you expect the Raptors to let Shawn Marion's contract expire at the end of this year, or might Colangelo see him as a long-term fit? What would you do if it were up to you?

HHN: I think it's pretty much a risk free move as you have the options.  You see how Marion plays for the rest of the season, and if you like what you see with him playing with Bosh-Calderon-Bargnani, you sign him for longer.  Trading for Marion gave the Raptors so many options and will still have enough money to sign another mid-level player.  I like really like Marion as a player and think he can do much more than Jermaine O'Neal would have done.  If it was me, I personally would keep Marion in the long-term and then sign a good F-C player to come off of the bench.

P&T: This Jay Triano fellow seems like a friendly enough coach. Do you think he's strictly interim, or is Triano full-time material?

HHN: Personally, I like Triano and had high hopes for him as he's a Canadian product and would like to see him do well.  Unfortunately, just the way the Raptors' season has gone this year, Triano had stepped into a pile of doo-doo and was forced to try and turn it around.  The Raps poor play will unjustly reflect on him when I believe other factors have contributed to the Raps horrid season.  If he had walked in fresh into a new season, I think things would be different.  I personally think Triano will be here until season's end and then Colangelo will shop around for a new coach.

I must say though, he is pretty friendly and if you ever watch a post-game interview, even if the raptors play horrible, he never sells out the players.  It's nice but can be hard to watch sometimes especially when it's the players who just didn't show any effort.


P&T: The Raptors have perhaps the coolest guy in the NBA in Nathan Jawai, an indigenous Australian who's built like Shaq and got his first NBA points the other night. Can we expect more minutes for this living legend?

HHN: I think so, I think he was supposed to go to the D-League a while back but when J.O. got injured, they kept him on the roster.  I want him to do well but his skills are so raw, it would be good for him to go to the D-League and actually play.  He'll get garbage time minutes with the Raps but I think that'll be about it.

I like him though.  No matter what, he's always smiling on the bench, even when the Raps are down 30+ and playing like crap, he's on the bench having a good time.

P&T: If alien life forms observed mankind, but took only the Toronto Raptors bench as their sample, they'd get a pretty ridiculous idea of what humans look like. I guess you could say that about any professional sports team, but I feel like Kris Humphries, Roko Ukic, Joey Graham, and Jake Voskuhl are enough to give aliens an especially warped idea of our species. I guess that's not really a question.

Get psyched, y'all. Tommy Dee says neither Chris Wilcox nor Larry Hughes will suit up tonight, which is a shame. Hopefully they'll do fine, though, because every win counts these days. Especially at home. Stop on by for comments. Let's hope the temporarily depleted Knicks can get shit done.