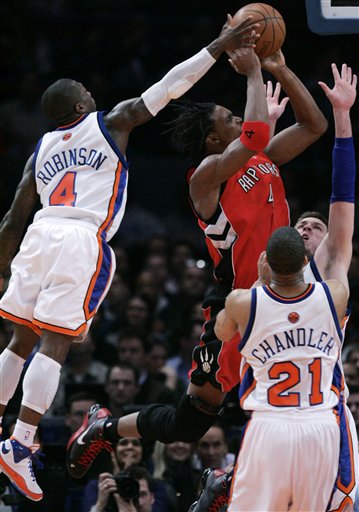 That felt good, eh?  The Knicks used a hot-shooting first half to make quick work of the flat Toronto Raptors at the Garden this evening, winning decisively for the first time in a while. Your notes:

- I'm starting a game show. It's called Donnie Or Diesel? and contestants are challenged to listen to audio clips and decide whether it's Donnie Walsh or Vin Diesel talking.

- Larry Hughes and Chris Wilcox were introduced and interviewed before the game. Both were in attendance and Wilcox even suited up but didn't play. We'll likely see them both on Sunday, with Hughes sporting #0 (we're still unsure who the last Knick to wear the naught was) and Wilcox paying tribute to Rick Brunson with #9.

- Is it just me, or does Wilson Chandler always take and make the first shot of the game? Wil's inagural make was a sign of things to come tonight. He dropped a career-high 32 points, including an impressive 6-10 from downtown. Wil looked remarkably confident everywhere on the floor, and threw down the sickest dunk of the night off a Nate Robinson feed. True to form, he followed his dunk by staring off into space with his mouth agape. If you look at the video closely, he may have even been drooling.

- I don't I've ever seen a team as flat as the Raptors were tonight. Nobody talked, nobody closed out, and hardly anyone showed any interest in the game's proceedings. Granted, it's hard to keep your head up when the opposing team shoots 17-39 from downtown, but still.

- Paul Simon was Jill Martin's "Gimme a Minute" halftime interview, and I swear he's gradually morphing into Woody Allen. The whole thing was especially awkward because some noisy Italian folk music completely drowned out the interview. It was "Italian Heritage Night" because of the cosmic meeting of Andrea Bargnani and Danilo Gallinari. Paul Simon probably has mixed feelings about Italians now.

- Bargnani's visits to New York mean something else: The resurfacing of Walt Frazier's idiosyncratic speech impediment! Those of us who caught the MSG feed got to hear Clyde call the Italian big man "Barn-YAR-ni". Even stranger was that tonight's play-by-play man, Kenny Albert, seemed to pick up the naming difficulty halfway through the game. I swear they were both calling Chris Bosh "Barsh" by the end of the night.

- Nathan Jawai is my favorite player. Ever.

- Nate Robinson couldn't keep up his string of 30-point games, but did explode for 26 points on a number of ridiculous shots in addition to 7 assists. His play of the night, though, was this aerial assault on Chris Bosh's ego:

Not just a dunker, y'all. It still tickles me when Nate swats bigger dudes. That'll never get old.

- Danilo Gallinari's gotta get back to where he was mentally a month or so ago. The Knicks need his shooting, but I'd love to see him put the ball on the floor a little more. Il Cock shot 3-10, including just 2-8 from downtown.

Anyway, tonight's win was a welcome relief. Kind of a shame it came after the trade, though. Figures that the one night New York blows a team out by 30, Malik Rose and Anthony Roberson aren't around to come in and heave contested jumpers. Oh well. It'll be the Raptors again on Sunday. Hopefully the two new guys (and perhaps some additional call-ups?) can help the Knicks continue this little streak and stick it to the Raps once more.

Before I leave you, let me wish a happy birthday to Mr. Stephon Marbury, who's still entertaining at 32. Donnie Walsh is just like a trifling girlfriend, you know.