Share All sharing options for: Game Thread: Knicks at Raptors- 2/22/09 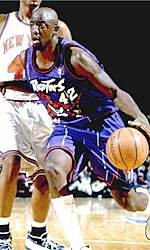 Yep, we're doing this one again. The Toronto Raptors haven't had enough after getting pasted by 30 points on Friday. This time, the rumble's in Toronto, so expect the Raptors to be a little more energized in front of their home crowd than they were in New York. You can't expect Chris Bosh to play that poorly again, and the same probably goes for the Raptor offense as a whole. The good news is the Knicks should be bringing some additional troops, with Larry Hughes and Chris Wilcox making their Knick debuts. I'd expect both to play meaningful minutes in what will likely be more of a contest than Friday night's blowout.

Tipoff's at the ungodly hour of 12 p.m. Those of you who got up early like I did can come by for comments throughout the afternoon. Let's hope the Knicks can get that road W against a team we know they can beat.