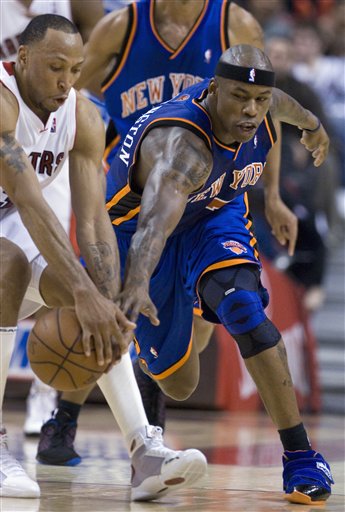 Fresh off a rousing win in New York, the Knicks laid a big, round ostrich egg this afternoon in Toronto. With two new additions to the rotation, New York seemed out of sync on both ends and got torched by several Raptors. Notes:

- Nate Robinson was seen having a pre-game conversation with the Toronto mascot, a giant red velociraptor. Word has it Nate's been taking Mongolian lessons, and seized the opportunity to converse with a native speaker.

- Chris Duhon got off to a terrible start and played much worse than his numbers would suggest. He had 6 turnovers (4 of which came in a 5-minute stretch in the first quarter), settled for a lot of threes, and got bottled up in the pick-and-roll. Credit the Raptors with stepping up their post D, I guess.

- Chris Wilcox and Larry Hughes played just as advertised in their Knick debuts. Wilcox didn't show much of an offensive repertoire, but ripped down a few boards and finished strong at the rim. Hughes, meanwhile, had his shot blocked a few times early on, so he just settled for contested 18-foot fallaways for the rest of the night and shot 1-9. Gus said his shots looked "short and flat" all afternoon, which is what we in the business call a "Meg Ryan game". Welcome to New York, Larry. Please stop taking so many bad shots.

- D'Antoni made the decision to let Wilcox and Hughes make their debuts simultaneously, which meant that the Knicks fielded a second quarter lineup that was 40% rusty. Sure enough, the Raps responded with a 12-0 run. The roll-out of new players could've been handled with a little more tact, no?

- The introduction of Wilcox and Hughes had a noticeable effect on the rotation. Wilson Chandler saw only 24 minutes, Quentin Richardson got only 13, and Danilo Gallinari did not play at all. I said earlier that if there's anybody whose minutes should be sacrificed, it's Jared Jeffries. Oddly, he saw an above-average 29 minutes, most of which were spent failing to stop Jose Calderon (13 and 11). This does not please me.

- Then again, Jeffries was the only Knick with a positive (+2) plus/minus, so what do I know?

- The benched Gallinari got to see his countryman, Andrea Bargnani drop a christ-like 28 and 10 from all over the floor. Increased production from Andrea meant we got to hear Clyde and Gus call him "Barn-YAR-ni" about 600 times. Kenny Albert and Gus Johnson are two professional announcers who speak perfectly good English, and now they're both mangling the pronuncation of that last name. Clyde is clearly contagious.

- Speaking of contagious, Bargnani appears to have that disease where you grow pubes all over your face.

- Nobody on the Knicks really had anything going offensively except for Al Harrington, who finished with 31 and 7 on 13-21 shooting. In fact, this would've been a blowout if New York wasn't oddly accurate from downtown in the first half. The Knicks shot 42% from two-point range. Who the hell does that?

- David Lee deserves credit for resurrecting what started as an off game and finishing with 17 and 15. That said, someone needs to get on his case for being the laziest outlet passer on earth.

- Nate caught another alley-oop from Chris Duhon. I probably won't post the video since it was almost identical to the one against Atlanta. In fact, the only real difference was that the Knicks used the original play to build momentum. This one was an anomaly in a game of miscues.

- I've always taken Gus Johnson to be a universally positive chap, but he's got vehemently negative opinions of Chris Bosh. He acknowledged that Bosh is talented, but repeatedly deemed him overrated, citing the Raptors' limited progress and Bosh's own tendency to fade. With New York as a potential suitor for Bosh in 2010, that's interesting to hear. We also shouldn't forget that if Bosh were to join the Knicks, Walt Frazier would need to be fired. I can't hear him called "Barsh" 82 nights a year.

It was a disheartening start to the Hughes/Wilcox era in New York. Mike D'Antoni botched his first attempt at the new rotation, and sent out ramshackle, unfamilar lineups that struggled on both ends of the floor. They'll work things out, but today's Knicks disappointed in all regards. Playoff teams beat the Raptors, roster changes or not. Next game's tomorrow against the short-handed Pacers. It must be had.