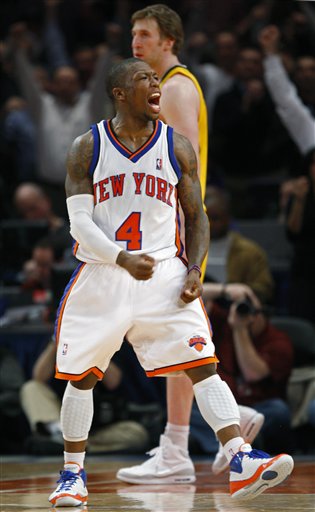 I don't think I've ever seen a basketball like that one. Let me set the scene for you. Indiana played without Danny Granger, Mike Dunleavy, and T.J. Ford. The Knicks gave significant minutes to two guys making their MSG home debuts. As you might imagine, things got ugly. Actually, you can't possibly imagine how horrid the first half of this game was. Both teams shot around 35% from the field and a combined 4 of 27 from downtown in the first two quarters. At halftime, however, both teams must've had some of that potion Bugs Bunny gave the Toon Squad (just water!) in Space Jam. The second half was an offensive extravaganza. The Knicks scored 72, the Pacers 68, and shooting numbers spiked to rather reasonable final tallies, as if that horrendous first half never happened. In the end, the Knicks out-executed the severely depleted Pacers. A Chandler block, Robinson steal off an inbound pass, and several late free throws allowed the Knicks to narrowly escape humiliation. Notes:

- In case you thought Clyde's tendency to add an "R" to last names was limited the Raptors, I give you "Roy Herbert".

- Wilson Chandler posted one of the worst shooting games of his young career, but still managed to be effective. His 4-18 performance was a reflection of poor choices with the ball (1-6 from downtown), but credit Wil with making his presence felt on defense, especially late in the game.

- Larry Hughes did not shoot well in his second game as a Knick, and got the treatment from the Garden crowd. That's right, Knick fans booed Larry Hughes in his first-ever home game as a Knick. And he deserved it. Shooting contested jumpers when you're admittedly rusty is downright moronic. That said, Larry refound his head in the second half and concentrated on defense. He'll come around. He just needs to never, ever shoot unless he's wide-ass open.

- Marquis Daniels was playing with the flu (and even took trips to the locker room, presumably to puke, throughout the first half), but absolutely torched the Knicks for 28 points. I take solace in the fact that A. The Knicks won B. Daniels looks like an iguana.

- Will Ferrell attended tonight's game, and if you know anything about Nate Robinson, you'll know that he goes apeshit for Will Ferrell. The two exchanged "shake and bake" fist pounds all night. I'm not kidding. This actually happened. More on that later.

- Speaking of which, when Mike Breen explained that the "shake and bake" phrase to which Nate so often alludes is from Talladega Nights, Clyde responded "Really!? I thought he got it from me!" How Clyde manages to be so cool with so little sense of pop culture is beyond me. Maybe what makes him so cool is that he's still stuck in 1970.

- Al Harrington attempted to pull the chair out on Roy Hibbert in the second quarter. He actually managed to induce a travel (though it wasn't called), but totally botched the execution by sliding sideways rather than backwards. Did I just experience feelings of longing for Malik Rose? There's no way that just happened.

- Nate Robinson and Jeff Foster got into it a little in the second quarter. Well, more accurately, Foster set a hard pick on Robinson, and Nate repeatedly showed him up for the rest of the period.

- Be it illness, injury, or just that time of the month, Chris Duhon is in bad, bad shape. Not only is Du's effort lacking, but his decision-making is strikingly bad, as can be seen by his 6 turnovers in each of the last two games. After his fifth TO, he went to the bench and was seen soliciting Purell from the Knicks training staff. No joke. Du actually washed his hands of his own point guard play.

- I think Eddy Curry may be able to out-jump Larry Hughes.

- Chris Wilcox played decently in this one, but his free throw shooting is really unsettling. With the possible exception of Jared Jeffries, we haven't seen a Knick with such bad form in a while.

- A gem from Mase in the comments:

- 27 and 7 for Harrington. 20 and 13 for Lee. Thanks to both for helping the Knicks avoid embarassment.

- The night's biggest props, however, go to Nate Robinson and Nate Robinson alone. Despite providing the Knicks' best three-point effort (4-6), Nate was hell-bent on attacking the rim. His 15-19 from the line, 8 bounds, and 32 (!) second half points single-handedly kept New York afloat. Nate was otherwordly this evening, and we can thank him for preventing an emotional meltdown at Posting and Toasting.

- Which leads me to this: Will Ferrell is Nate Robinson's muse. It's obvious. We've always known Nate was a fan, but Ferrell's physical presence brought forth one of Nate's most dominant performances of his li'l career. Can't somebody get him season tickets? The Garden would get a nice famous face in the crowd, Ferrell would get to see plenty of live basketball, and Nate would average 40 and 8 for the rest of the year. Everybody wins.

And there you have it. The phrase "a win is a win" seems appropriate. We saw a legendary disparity between the first and second halves, several miserable individual performances, and a near-win for a team that gave significant minutes to Travis Diener. All in all, the Knicks came out on top, and that's all that matters. Next game's on Wednesday against the Magic. This kind of sloppiness won't fly against Orlando. Time to step things up.