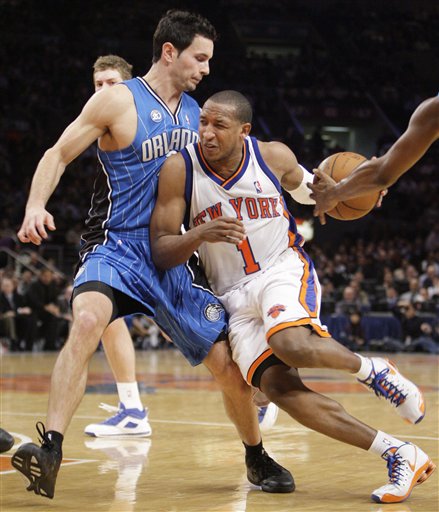 Like it or not, the Knicks rarely get blown out any more. This year's team has a remarkable ability to hang around against superior teams. One of these days, they might even start winning such games. Tonight, though, the Magic weathered the storm and escaped a late Knick comeback to win in New York. Dwight Howard dominated the diminutive Knicks with 24 points and 21 boards while Hedo Turkoglu found the touch from all over the floor for 33 points of his own. A tremendous effort from those two and important contributions from other Orlando starters allowed the Magic to overcome their lack of depth and beat our Knicks. Some notes:

- The first quarter bore a strong resemblance to the first half against the Pacers the other night. The ball movement wasn't great, but guys were still getting open looks. Shots just wouldn't fall. The difference between tonight and Monday night, though, is twofold. First, the Magic didn't play along with the home team's struggles. They shot around 50% in the opening quarters. Second, Orlando had Dwight Howard to turn back any penetrators. The solution against Indy was to attack the rim. With Howard (4 blocked shots and one iffy goaltend) in the paint, it wasn't so easy. So the Knicks kept shooting and finished the half with only 43 points and down 14.

- Sometime in the first quarter, the topic turned to the Nets and Mike Breen asked his partner, "How about Devin Harris's halfcourt shot, Clyde? Did you see it?", to which Clyde replied "ha-HA!". Clyde didn't see it. This is just one more piece of evidence suggesting that Walt Frazier doesn't watch much basketball in his free time. In fact, in 15 years of watching the Knicks, I've constructed the following list of Clyde's hobbies:  1. Buying colorful clothes 2. Learning colorful words. 3. Napping (and presumably dreaming colorful dreams).

- One thing Howard's improved upon is passing out of double teams. Big men that are patient when doubled kill the Knicks, and that's how Orlando got a lot of their open shots.

- I've mentioned this a few times, but one thing that puts the Knicks at a disadvantage is that they don't really have that guy. Nate Robinson and Al Harrington have both shown flashes, but neither has fully assumed the role of "player who takes over on offense when all else is failing". Nate's certainly getting there, but I digress. My point is, other teams do have these guys. Hedo Turkoglu was the man for Orlando tonight. In the second quarter, with both teams resting many of their starters, Hedo stayed on the floor and repeatedly created his own shot. At one point, he so badly burned Larry Hughes that Mike D'Antoni nearly ate Hughes alive. I'm serious. I think he bit him.

- Speaking of which, I have absolutely no problem with the MSG crowd booing Larry Hughes. He deserves it. I understand completely that Larry hasn't played ball in a while and his shot's a little rusty. Here's the problem: if you're rusty, then don't shoot so goddamn much. Hughes is now 4-22 as a Knick, and at least half of those shots have been his trademark double-pump fadeaways that he releases just before he hits the ground. If the shot's not quite back, then find other ways to contribute like playing defense or mopping the floor or something.

- Cuttino Mobley attended a game for the first time this year. The poor guy seems like he's managing without basketball, but sincerely wishes he could've contributed to the Knicks. Watching Hughes brick 20-footers makes me want to give Mobley my heart.

- My other beef of the evening is with Chris Duhon, as it has been since the All-Star break. The numbers (10 assists, 7 rebounds) say that Du contributed in his own li'l way, but I say otherwise. A point guard should lead by attacking the opposing defense and picking up the spirits of his team. Chris rarely asserts himself on offense, and tends to putter around and mope instead of pumping up his troops. These deficiencies (which, I should add, are relatively recent) are especially glaring when contrasted with Nate Robinson. Nate's putting up sick numbers because he's relentless with the ball in his hands and leads by example in the emotion and effort departments. I know Du has the skills and the court vision to have the same effect, so it's just a matter of energy. That means not dribbling behind the basket and lobbing hospital passes out to the three-point line. New York needs Duhon to get himself right, or Nate's gonna render him obsolete.

- David Lee was in a pretty surly mood this evening, probably because his shots weren't falling on one end and he had to body up a sweaty, 7-foot überhuman on the other end. Lee's grumpiness bubbled to the surface twice. Once was when he and Marcin Gortat tied up the same loose ball and Lee was seen barking "my ball!" in his face. The other was when Tony Battie flopped to draw a loose ball foul and Lee responded with a nice, condescending "Dude...".

- Nate had himself another big game with 32 points, but wasn't quite as efficient (11-26) as he has been recently. That said, it's runs like this that make me think Nate's got a chance at being that guy: 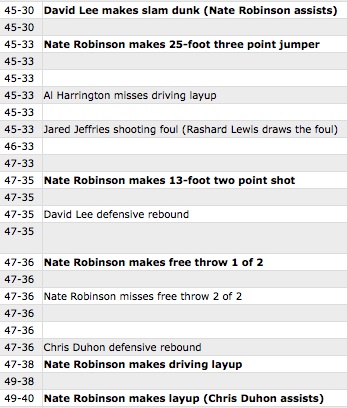 A 3-minute stretch in the second quarter (from ESPN).

- Rafer Alston looks Blarp from the awful 1998 version of Lost In Space. Plays like him too.

- The MSG baby was back! For those of you who don't know, the kid's named Luca and he's been sitting courtside at occasional Knick games for the last 3 years, growing up before our eyes. They almost always win when he's in attendance, but I guess tonight was the exception.

- What if we signed Larry Hughes up for elective surgery in which he has his fingers fused together? This way, he could still play defense and knock away passes for steals, but he wouldn't be able to shoot at all. It'd be perfect. Sorry I keep picking on Larry, but I'm just trying to help.

- I thought we'd see more Chris Wilcox, but the Magic exposed an inherent problem with Chris's addition to the Knick defense. D'Antoni's been switching everything on screens all season, which poses a problem. Jeffries and Lee can usually make at least a passing effort at staying in front of a quicker player. Wilcox, though, is a legitimate big man who's unaccustomed to leaving the paint very often, so when he finds himself alone against Hedo Turkoglu, things get ugly (and not just because it's Chris Wilcox guarding Hedo Turkoglu).

- Props to Wilson Chandler for overcoming a slow start and finishing with a quiet but superb 27 points on 10-19 shooting (including 6-8 from distance). Wil's at his best when he's confident, and it was great to see him force the issue despite early struggles.

- Final note: I was happy to see Danilo Gallinari get late-game minutes, and ecstatic to see him produce. When the Knicks were fouling and going for quick threes down the stretch, Gallo hit a couple clutch J's (one was an absolute bomb, the other he kinda chickened out and stepped in for a two-pointer) to keep the Knicks' hopes alive. The Cock's got balls, y'all.

And there you have it. The Knicks rallied courageously, but couldn't quite make up lost ground from the first two quarters. NBA action returns to the Garden on Friday when the Sixers come to town for what seems like the fifteenth time this season.