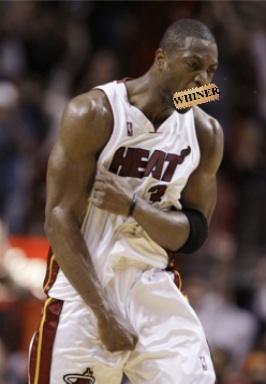 The Knicks have played 6 solid quarters of basketball this weekend. Unfortunately, it was two awful ones that made all the difference. Friday's first quarter lost the game against Philly. Tonight it was the fourth. Dwyane Wade got hot from the field as the Knicks squandered a 15-point lead and lost their second stupid, stupid game straight. Notes and bitterness below.

- I have to get this out of the way. Wade's run in the fourth quarter (24 points in about 10 minutes) was ridiculous, but completely contrived. See, Wade's lip got busted by Danilo Gallinari's elbow, and he decided to use that as a platform to get all angry and start burying shots. Obviously, the refs fell in step and trumpeted Wade's brilliance with their little whistles. Thing is, Gallo didn't elbow him! In fact, Wade gambled to pick off a pass and drew contact when Danilo rightfully tried to protect the ball. That's just invading someone's personal space and facing the consequences. Not at all reason to get so angry and start canning jumpers. I think the league should review this and subtract like 20 of Wade's points.

- Finishes like that are hard on one's memory of the early quarters, but I'll do my best. Chris Duhon looked a little more himself tonight. He finished with 19 and 9, and was absolutely silly from downtown in the first quarter. He had four loooong bombs to give the Knicks an 8-point lead at the end of the first.

- The name "Jamario" never ceases to amaze me. Can "Lamario" and "Damario" be far behind?

- Larry Hughes had another solid game (19, 5, and 2 steals) but more importantly attempted and hit the ugliest shot in the history of basketball. Larry was following backwards out of bounds under the basket and shot this two-handed granny-style joint that hit the very top of the glass and fell in. Future Knick games will be on tape-delay so MSG can blur out things like that.

- The Beacon Theater is advertising a "Thomas The Tank Engine" musical that appears to feature a man in a skintight, sleeveless, leopard-print latex suit. Consider me intrigued.

- Alonzo Mourning is having his number retired in Miami, and got interviewed by Tina Cervasio in the third quarter. Seeing Zo on MSG made me instinctively think it was the 1998 playoffs, which led me to scream, claw my eyes out, and then weep to K-Ci and JoJo's "All My Life".

- No Quentin Richardson in this one. Is he hurting, being eclipsed by Hughes, or both? I would've liked to see him tackle Wade a few times tonight. And I don't mean tackle like "I gotta go tackle some of this homework!". I mean tackle like in the Lawrence Taylor sense of the word.

- Nate Robinson played out of his mind in the first three quarters, and then seemed to actually lose his mind in the fourth. He attempted a number of wild shots, got into it with Jermaine O'Neal (although I'm convinced Nate would break that giant baby) and was generally a throwback to his out-of-control days.

- On a night when no other Knick posted worse than a -9, the Knicks were -23 with Al Harrington on the floor.

I don't have much more to say. Blowing decent efforts with 10 minutes of lifelessness got old many months ago. Allowing a sell-out star with a boo-boo on his lip to have his way with you is even more infuriating. Luckily, those of us who need a break from this nonsense will get some respite. The Knicks don't play again until Wednesday. Commence seething.