Share All sharing options for: Game Thread: Knicks vs. Cavaliers- 2/4/2009 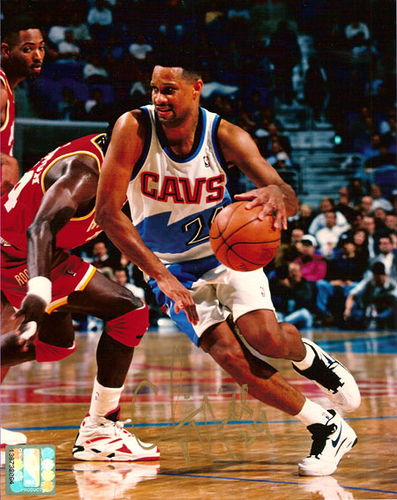 First of all, those 90's Cavs jerseys were the goddamn truth. I mean it.

Second of all, those same Cavaliers (and their newer, less MS Paint-looking threads) are invading the Garden and you know what that means: we'll be hearing more speculative Lorenzen Wright rumors than we'd like to. In all seriousness, LeBron James is the baking soda to the New York media's vinegar, and the next 24 hours or so promise to be nothing short of volcanic. Will LeBron show up in a Yankees cap? Will he announce that he's dating Janel McCarville? (Go ahead, click the link. I had to research it too). Knowing James, there's bound to be some juicy quotables for tomorrow's morning editions and blog entries. I'm also wondering if this is the week the NBA's superstars have picked to exploit the Garden as a soapbox for MVP candidacy. Perhaps LeBron will drop 50, 15, and 15 for a team-friendly twist on Kobe's unilateral explosion. Maybe KG will top them both by notching 0 points, 25 assists, and 60 rebounds punctuated by ramming his head clear through the basket support despite flu-like symptoms, because it's all about Ubuntu, kids.

More than anything, though, I'm wondering if the Knicks will show up tonight. From the outset, this seemed like New York's slimmest chance at snatching a win out of "Hell Week". While they've hung with LA and beaten Boston, the Knicks haven't even survived a half against the Cavs. I was at one of those two blowouts (The Bron's first visit to MSG this season), and can vouch that the thing was over roughly seconds after tip-off. On the bright side, the loss I attended and the subsequent re-smashing in Cleveland were both immediately following Donnie Walsh's salary-slashing roster massacre of '08. Since we last saw the Cavs, Harrington and Thomas have meshed into the rotation, Jared Jeffries has carved out some sort of nice for himself, and The Cock has engorged The Rooster has crowed. Our Knicks look sharper than they did immediately after the trades, and maybe they've got what it takes to shock the Cavs and steal the King's spotlight. That or it'll be another blowout. One mustn't forget that, just like Kobe, Bronsky's got a mild-mannered, weirdly somnolent European big man by his side. And just like Pau, Zydrunas Ilgauskas may shoot, pass, and rebound his way into a big second-banana game.

Either way, I invite you to come by tonight's game thread (tipoff's at 7:30), and join us for some fanaticism, wit, and Amanda Bynes photos. I'll be here to comment along and to recap what should be an interesting night. Also, make sure to fawn over Lorenzen Wright at the superb Fear the Sword this evening. With luck, we can trick Cavs fans into thinking he's the guy we want in 2010 so they'll beg Danny Ferry to give him a massive extension in '10 instead of you-know-who. It's just crazy enough to work.