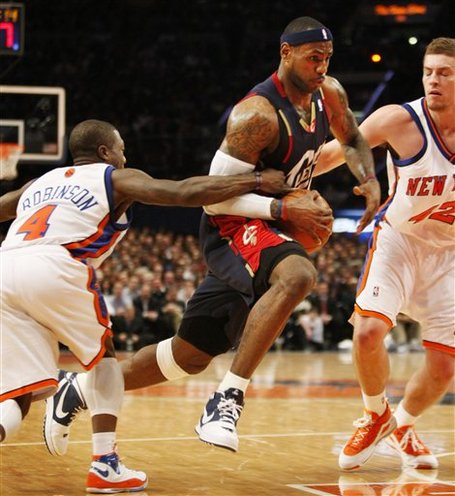 If you are a basketball fan and plan on reading basketball websites tomorrow, expect to be asked whether Kobe's 61-point outburst or LeBron's 52-point triple-double was the more impressive performance. Don't expect to hear about the fact that the Knicks managed to hang with two championship contenders, and nearly even stole one this evening. Tonight, though, LeBron was too dominant, the rest of the Cavs too accurate, and the Knicks too haphazard down the stretch. Some notes:

- Let's get this out of the way. LeBron was fantastic. His jump shots were falling from the outset, and he beat any and all en route to amazing finishes and foul calls. That said, it gets very easy to make things happen at the rim when A. You either push off or travel on every possession and B. Nobody plays help defense. Ever. James would gain a step on Richardson, Chandler, or Tim Thomas by swiftly thrusting three fingers into the defender's sternum, then explode towards the rim while David Lee twiddled his thumbs. This made for lots of fouls, a couple and-ones, and a lot of grief on the part of Walt Frazier. Sometimes it's just impossible to stop that Bron, but here's my best solution: if you're going to foul him (which you are) foul him HARD and foul him long before he leaves the ground. That includes over-playing him off the ball and tripping/biting/shanking him if he gets a step on you. Before the game, Clyde quipped that "Some players make things happen, some players watch things happen, and some players wonder what happened". Eerily prescient.

- The Knicks actually outscored the Cavs in the latter three quarters. It was a quick double-digit deficit in the first that seemed to do them in. The early offense was stunningly casual and sloppy, while James had his outside shot working on the other end. The score was 10-0 at one point.

- I'm getting to be a broken record, but I'm compelled to say this again. Chris Duhon needs to assert himself. 2-8 (including 1-5 from downtown) is really disappointing from a guy who is very capable of challenging big men and finishing around the basket. Like I've said before, not only does this deprive the team of much-needed backcourt points, but it cripples the pick-and-roll and shuts out David Lee. If Du won't attack, defenses can loosen up after screens and stick with the roller. Lee managed a double-double, but his rather underwhelming 4-9 is a direct result of the Cleveland big men backing off Duhon. Du and Lee had the two worst plus/minuses on the night.

- Mike Brown, realizing that he's employed to pretty much spectate and occasionally yell at refs, opted not to wear a tie. Over the next few months, he'll stop wearing a jacket, stop sitting on the sideline, and eventually stop coming to games entirely. Nothing about Cleveland's play will change.

- To diversify his game, Danilo Gallinari's got to recognize mismatches a little better. When Gallo draws someone like Zydrunas Ilgauskas out on the perimeter, he's definitely got the skill to put the ball on the floor and head rimward. That confidence and knowledge of who's who in vulnerable defenders will come with experience.

- Also worth noting: Gallinari's brief defensive assignment of Daniel Gibson meant that for an ephemeral but splendid moment in P&T history, we witnessed Cock on Boobie. A thousand thanks to Serious Garbage Time for pointing that out.

- The enemy's heroics overshadowed one of this season's best offensive games by a Knick. Al Harrington got absolutely silly from the field, hitting 16 of 24 shots for 39 points to go with his 13 rebounds. If Al had somehow outscored LeBron in a Knick win, the irony would be so marvelous that I could probably die happy from that point forward. Harrington may well have hit the 50-point mark if he hadn't been frightened by a spider on the court in the mid-second quarter, as seen here: 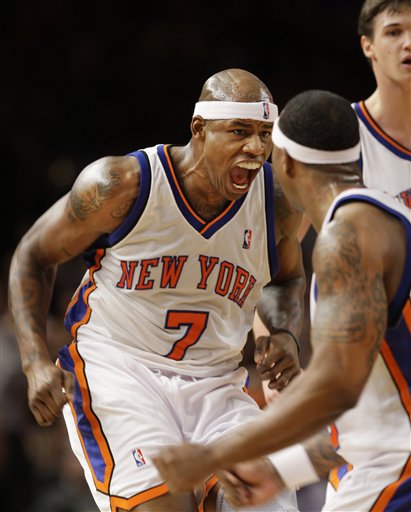 - Last, but most important note of a short recap: During a late-game timeout, with the game pretty much won, LeBron was seen singing along to the tunes playing from the Garden PA speakers. I know he's a superstar. I know he can dominate. I know he's still young. All I'm saying is, do you really want your favorite team captained by somebody who knows all the words to Jet's "Are You Gonna Be My Girl"?

Now, I know there are no moral victories and that giving up consecutive career nights is not recommended, but I've come to terms with these results. The Knicks have shown that they can play ball with anybody (except for the Bucks and Sixers, oddly), and these matchups with contenders probably aren't necessary for a playoff berth. As Mase said in the thread, the season will be won or lost in winnable games against sub-.500 squads- especially on the road. It'd be nice to steal another one from a titan, but we may just have to take solace in the fact that we scared 'em.