Share All sharing options for: Game Thread: Knicks vs. Celtics- 2/6/09 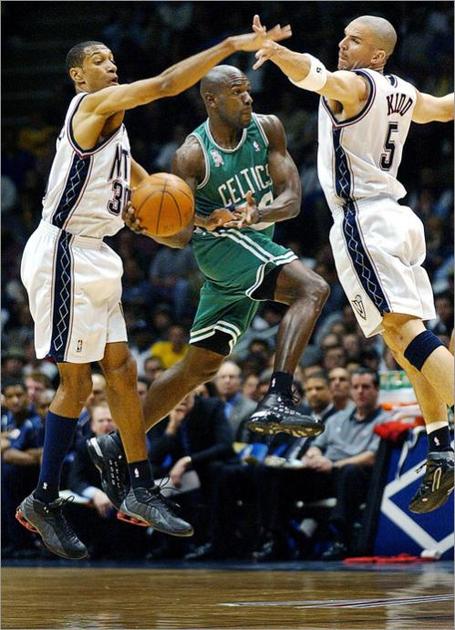 Good evening, friends. It's the Knicks and the Celtics tonight at Madison Square Garden. Who knows what sorta shit they'll pull to finish what's been an impressive week for Knick opponents. The C's are more down with teamwork, defense, and the like than individual accolades, perhaps they'll shut the Knicks out or something. Boston lost a tight one in overtime last night to the Lakers, and I (and the Celtics fans I've spoken to) would expect a testy Celtic team rather than a tired one this evening. Kevin Garnett fouled out and was forced to sit through the late fourth and overtime, which is a little bit like caging a shark when there's blood in the water. He'll have the last meeting between these two teams- when Wilson Chandler took it to him on both ends- in mind as well, so expect KG to spearhead a fierce Boston effort tonight. With Pierce and Allen in tow, there's a good chance that Garnett could lead his team to a blowout win. Maybe, though, New York can catch the karma train after some bad breaks against the Cavs and Lakers. It all goes down at 7:30 tonight. Those of you watching best stick around for comments, hooplah, and pageantry throughout the game. For a glimpse into the enemy ranks, stop by Celtics Blog. Go Knicks.