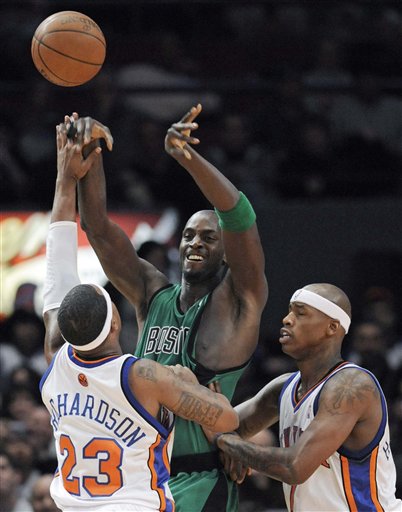 Moral victories can shove it. With a loss tonight against the Celtics, the Knicks have gone three up, three down against the NBA's elite. Each game was close, but New York's flawed late game execution proved damning in each of this week's relatively close contests. Tonight, the Knicks shot poorly, but played three quarters of very active defense to keep things close. There were highlight plays, a couple scenes of chippiness, and even a "Boston sucks" chant to make the night interesting. Paul Pierce and Ray Allen, unfortunately, took matters into their own hands and hit dagger after dagger to lead a fourth quarter obliteration of the Knicks and our collective hopes. Some notes:

- I think you can hone in on two things that kept the Knicks competitive through three quarters: defense and Duhon. After kneeling to Kobe and LeBron in the last two contests, the Knick D did what they could to bully the Big Three. They switched quickly and decisively on every screen and scavenged careless passes when they could. Al Harrington grabbed 5 steals to spearhead pretty solid off-the-ball D. It wasn't until the fourth that KG and friends were able to respond by finding open men under the basket when the defense was scrambling. That second key was Chris Duhon's decision to assert his will. After a couple nights of feeling flu-like and laying in the cut, Du attacked the rim a little and to keep the Celtic defense honest. Note that not only did Duhon have 15 and 7, but Lee had 18 and 18. When Du attacks, everyone wins (except for the Knicks, apparently, but you know what I mean).

- The game was a bit chippy, as Knicks-Celtics tilts tend to be, but relatively tame compared to previous matchups. It started when Glen Davis put a very hard foul on Tim Thomas on a fast break, continued when Kevin Garnett got T'd up for elbowing Danilo Gallinari on a dead ball, and culminated in Al Harrington knocking KG to the floor on a layup attempt. There was a little inter-squad jawing, plenty of referee grief, and some pushes and shoves, but it wasn't anything too unsightly. It's nice to see the Knicks get a little physical after those LA and Cleveland games.

- His shot selection deteriorated later in the game, but there was a moment there when Nate Robinson was making excellent passes instead of forcing shots. Nate finished with 12 points (4-12) and 4 assists, with a couple pretty ill-advised pulls but a couple nice dimes as well.

- I've heard about the way that Manu Ginobili's long hair helps to exaggerate contact, but I've never seen anyone sell a call like Danilo Gallinari does with his facial expressions. Gallo got fouled while dribbling at one point, and managed to convey disgust, befuddlement, and triumph within about half a second. In fact, Gallo's faces are generally brilliant. His eyebrows jump off his head like a cartoon character's, his mouth twists sideways, and his eyes turn damn near upside-down. After hitting a three, he pumped his fist and ran down the floor with his facial features completely scrambled. It's like a Picasso painting. 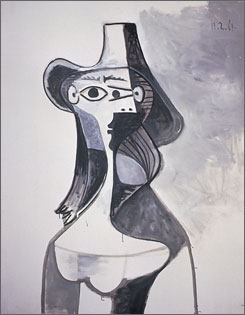 - Chris Duhon performed a feat I don't think I've ever seen before. After corralling a loose ball, Du rose up to shoot a three, then thought better of it and threw the ball off Paul Pierce's foot. In mid-air. I've never seen something so simultaneously demented and brilliant.

- Do people like Tyler Perry? They must, because where else would he get the money to air two TV shows simultaneously and make movies about himself cross-dressing every 6 months?

- If there's anything we've learned from Mike D'Antoni being mic'd up for the last few games, it's that he could be much more efficient in huddles. He could get a lot more information across if he cut down his repetition of "come on baby" and "here we go" by a factor of about ten.

- Just kidding. I love the enthusiasm.

- When Garnett bashed his head against the basket support before the second half, about a liter of sweat spilled off onto the floor. That deserves a suspension if you ask me.

- I don't see much of Paul Pierce outside of Knicks-Celtics games (because I can't stand him), so I wonder if his propensity to nail heart-breaking turnaround jumpers as the shot clock expires is saved for New York, or if he does that all the time. Either way, it takes years off my life every time it happens.

- Al Harrington: 27 points on 11-26 shooting. Pretty nice, but I'd prefer he get more than two free throws. His line against the Cavs should be the model.

- My little clan of friends watching the game imagined a fantastic scenario in which the Celtics treat Glen Davis like Shamu. When Davis does a trick, like grabbing a rebound or hitting a jumper, an assistant coach tosses a fish in the air and he gobbles it up in delight. 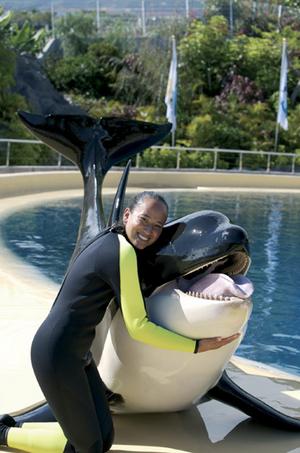 - Like I said, moral victories suck, but I will take some solace in the fact that the Knicks managed to hang with Boston despite being out-shot, out-rebounded, out-free throwed, and out-assisted. If a few more Knick threes dropped, this may have been a full-on robbery.

And I'll leave you with that. The schedule doesn't get much easier in the immediate future, with a trip to Portland leading off a mini-Western road trip (though the ensuing games are against much weaker opponents). The Knicks managed to stay relatively afloat by going 2-3 in their last five, and stayed competitive against each of the league's best teams. Scraping one win out of "hell week" would've been nice, but I guess these moral victories will have to suffice. At some point, we may have to petition the league to adopt a format similar to the NHL's, only instead of ties, moral victories count as one point. The Knicks would be dirty!