Share All sharing options for: Game Thread: Knicks at Blazers- 2/8/09 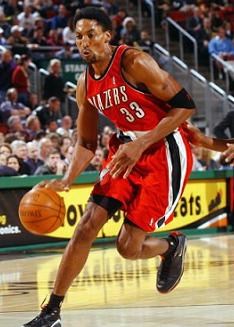 Good evening, posters and toasters. Particularly all you toasters. I feel like I should give more love to the single-minded but underrated kitchen appliances that read P&T everyday. You guys are the greatest. Keep toasting.

While "Hell Week" at the Garden has ended, the difficulties will continue tonight in Portland. The Blazers may have lost two in a row, but they get shit done at home (18-5), and pose a number of positional problems for the tired Knicks. Not only does Portland have a bona fide assassin in Brandon Roy and two terrifying big men in Oden and Aldridge, but they've got a deep bench with plenty of firepower. Given that New York tends to use second unit time as catch-up, a punchy opposing bench is the Knick fan's worst nightmare. In the last meeting between these two, Wilson Chandler was able to temporarily stifle Brandon Roy, while the Knick big men treated Greg Oden like he had the plague and challenged him to score. This worked out alright...until Roy got silly in the fourth and the Portland second unit out-gunned a decimated 7-man Knick rotation.

With a little more manpower and confidence, and perhaps a collective shoulder-chip after three frustrating losses, perhaps the Knicks can steal one on the road this evening. Tipoff's at 6 tonight, so light some candles, heat up some leftovers, and join me for a P&T dinner celebration. I guarantee our table conversation is more interesting and laden with penis jokes than you're used to. Also make sure to check out the formidable, venerable Blazer's Edge. You can expect several of their buddies to stop by these parts, so make sure to be civil.

We deserve a W. Go Knicks.