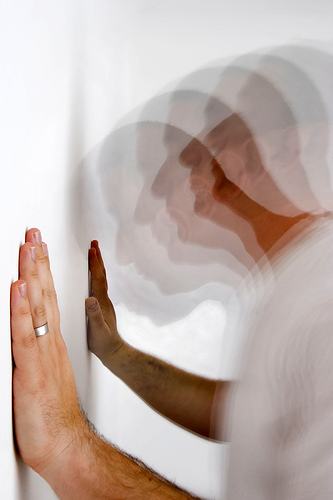 (Note: The more eloquent knee-jerk response is below.)

That one took years off my life. It was a see-saw of a game, with big runs, even bigger comebacks, and as heartbreaking a finish as there ever was. The Knicks fell behind by double digits twice and came all the way back both times. By the fourth quarter, they'd even built a big lead of their own, and stood 7 points up with less than 2 minutes remaining. The lead dwindled, though, and Brandon Roy sealed the deal with a driving finger roll over a Knick defense that somehow neglected to use their extra foul. Some notes:

- Could somebody explain to me why the MSG pre-game desk needs a rack of basketballs behind it? Do Trautwig, Tripucka, and ten of their friends all shoot around before the broadcast?

- With Mike Breen working his ABC gig, Gus Johnson called the action in Portland, and started oddly flat. Through the first quarter or so, Gus seemed completely uninterested in the action, which was actually pretty lively. Then, as the sun went down in Portland and the game wore on, Gus became Gus. He crapped his pants repeatedly, culminating in an instant classic "MY NAME IS AL HARRINGTON! I GET BUCKETS!" call following a Harrington three. Anyway, I've now got a theory. Gus Johnson is nocturnal. He had to wake up from his daytime slumber far too early to call the 3 p.m. Portland start. By sunset, though, he'd woken up fully and was ready to get loud.

- Keying a hot Knick start was Danilo Gallinari, who canned two quick threes to help give New York a very early lead. Gallo actually started in this one. He and Chandler replaced Richardson and Jeffries in a lineup that Mike D'Antoni claimed needed "more scoring". Oddly, Gallo played only 14 minutes (during which he had to guard Rudy Fernandez way too much) after a very nice start.

- Chris Duhon still seems a little flu-like, but he had the pick and roll working with David Lee, who overcame repeatedly having his shot blocked for a sick 29 and 11. Du finished with 10 and 10, but just didn't look himself.

- Clyde accused Sergio Rodriguez of "matador D" in the first quarter, which was excellent on multiple levels.

- As I mentioned in the game preview, the Blazer bench ain't too shabby, and they nearly ran away with this one in the late first quarter. Portland finished the first quarter up 9 on 88% shooting. You read that correctly.

- The Geico commercial where the gecko buys chips with his boss's lucky dollar is cute and all, but how would that little thing even open the flap of the vending machine to get his food? I assume he had help.

- It was "mascot night" at the Rose Garden, which apparently translates to a dozen inflatable versions of various NBA mascots being chased around the arena by Portland's "Blaze", which is some breed of rapist dog.

- Nate Robinson bought tickets for 33 Seattle-based family members, who were treated to a Nate-led run through the third and fourth quarters that put all other runs to shame. Between the two periods, the Knicks went on a 37-7 tear that included numerous ill-advised threes by Robinson and Tim Thomas, and even a made 70-footer by Nate after a whistle (didn't count). The entire experience was a slap in the face to consciences everywhere.

- There were a couple moments late in the game that I knew would cost me some sleep if the Knicks ended up losing. One was David Lee rimming out a dunk attempt with less than two minutes to go. Another was Quentin Richardson fumbling a defensive rebound out of bounds with even less time remaining. The last one was one of the more infuriating mental lapses I've seen in my years following sports. With 5 seconds left, the Knicks were up one with a foul to give. The Blazers had possession, and inbounded to Brandon Roy, who promptly drove left from the top of the key. There was about a 2 second window during which Jared Jeffries was practically required by law to use up the remaining foul. Portland would've had to inbound again with just a couple seconds remaining, meaning an outside shot would likely be their only hope. Somehow, though, Jeffries managed to follow Roy all the way to the basket without attacking him, and the smaller, quicker man carved a path and rolled in the game-winner as time expired. At this point, I swallowed my television whole. (Update: Apparently D'Antoni told his guys not to foul. If that's the case, he and I need to have a little talk.)

Sorry for a sub-par recap. I'm still more than a little dazed from what went down (did I mention that I was in the company of two screaming Blazer fans?). I'll never forget the crazy run that Robinson and Thomas led, but the memories will be bittersweet. The Knicks had this one in the bag, and really had to choke to let it go. If they don't come out pissed off against the Warriors and Clippers, I may lose hope completely. Sucks to moral victories. Hopefully I'll be coherent again tomorrow and we can discuss this in more detail. Probably not, though.