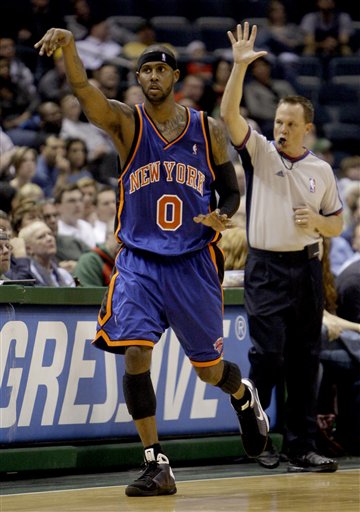 And the dream stays alive. It took a career night from Larry Hughes and late-game heroics from Nate Robinson, but the Knicks got it done. Tonight's win was special in terms of locale (the Knicks were 7-22 on the road), opponent (the Bucks had beaten the Knicks 3 times this season by an average of 16 points) and timeliness (more on that later). It wasn't pretty, but it was a big win. Some notes:

- First of all, I'm watching Sportscenter right now and I'm pretty sure I just saw a Snickers commercial with Patrick Ewing.

- Anyway, the Knicks looked as sloppy as ever in the first half. If it weren't for hot shooting from Larry Hughes, New York could've been down by much more than 9 at halftime. I feel dirty having just said that. Timeout while I go take a shower.

- Ok, back. While the Bradley Center was strikingly empty tonight, I've gotta give props to their timeout entertainment. Anyone who saw the game knows what I'm talking about. Baby races, people. What's a baby race, you ask? Well, a track with six lanes is laid out on the court. Six parents release their babies at one end of the track while six matching parents stand at the other end and beckon their babies to race towards them. It was without question the most enthralling athletic contest I've ever seen, and MSG only showed a few seconds. Anyway, this is as good a time as any to announce that I'm scrapping this blog entirely and starting SBN's first and only blog devoted to underground baby racing. Follow me to BawlingandCrawling.com.

- I mentioned that Hughes had the game of his life, and he did. 39 points (13-20), 6 rebounds, and 4 steals from Larry are what paced the Knick win. I wouldn't be a resonsible blogger however, if I didn't mention a particular play in the first quarter. After stripping the ball from a Buck, Hughes spun around and attempted what appeared to be an 80-foot hook shot. This serves as further evidence that Hughes is controlled by an unseen force with a Playstation controller. We've all been there. You're tapping "x" to get a steal, then you finally gain possession and you can't stop tapping! Sure enough, an ill-fated long-distance hook shot is headed to the other end of the floor. It happens to everybody, Larry.

- Scott Skiles talks to himself on the bench. Just saying.

- I like to think that the Knicks outplayed the Bucks, but the Milwaukee loss was at least 10% a result of their khaki warm-ups.

- I didn't hear Mike D'Antoni's halftime speech, but I imagine it went something like this: "Guys, take a look under the basket. See who's down there? That's Francisco Elson and Charlie Villanueva. You can- and must- destroy them". David Lee kicked things off in the third with a two-handed jam in Francisco Elson's mouth, and the rest of the Knicks fell in step. Attacking the basket and getting to the line won the Knicks a third-quarter turnaround in which they outscored Milwaukee 32-19. Lee, meanwhile, finished with 19 points, 18 rebounds, and ownership rights to the next child born to the Elson family.

- Wilson Chandler (2-6, 4 points) and Danilo Gallinari (0-5, 2 points) should probably both get a Men In Black-style brainwashing tonight.

- Nate Robinson took over in the fourth quarter, reeling off 10 quick solo points to help the Knicks weather a Milwaukee run. It wasn't just that, though. The Bucks also blew a lot of easy attempts down the stretch. It was oddly reminiscent of a typical Knick finish.

- As Mase pointed out in the comments, tonight's win is of particular importance in the Eastern Conference standings. The Knicks managed to take a timely step forward while Milwaukee, Charlotte, and Indiana all lost. Sure, it's just postponing the inevitable, but some progress was made.

So. After tonight, the Knicks site 2.5 games behind the Bulls, who are now sole owners of the eighth seed. The climb continues tomorrow night in Detroit. Hope you all can join in the game thread for that one.

In the meantime, our friend Dan from Disciples of Clyde asked an interesting question in the thread. Ramon Sessions, like Nate Robinson, is a restricted free agent this summer. Nate's far more prolific at getting buckets and provides more energy, but Sessions is bigger, better at defense, and more of a point guard. Simple question: Assuming equal pay (probably not the case), who would you rather sign this summer? I'm undecided. I love Nate but Sessions is sick. Hit the poll if you've got an idea.