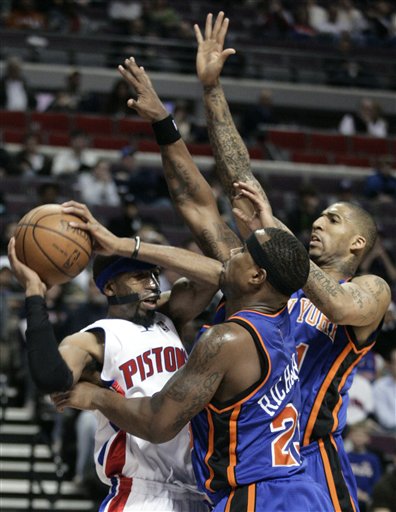 Wow. Whether it was a benevolent force that wants the Knicks in the playoffs or a cruel one that's setting us up for heartbreak, fate was at work tonight in Auburn Hills. After plodding through the second and third quarters, the Knicks found themselves down 12 in the fourth quarter. Against all odds, though, New York scrambled on defense and executed on offense to tie things up at the end of regulation. In OT, the fine defense continued, and the Knicks came up with an improbable road victory. Plenty to talk about in the notes:

- Tonight's boxscore displays one of the starkest trade-offs I've ever seen. At one end, the Pistons out-rebounded the Knicks 64 to 39, including a 23-11 edge on the offensive glass. Antonio McDyess (you may remember him from his high-flying years in New York) led Detroit on that front with 22, including 10 O-bounds. How can such a defeat be overcome? I'll tell you how. 3 turnovers. Total. 0 in the second half and overtime. We're talking about a team that prominently featured Nate Robinson and Larry Hughes. Detroit had 15 in all. The 3 total is a franchise record, and the turnover numbers alone made up for the rebounding discrepancy. The Knicks took 99 field goal attempts, and the Pistons 96. Crazy.

- The Knick D was pretty bad through three quarters, but they kept in it by hitting threes in the first quarter and a half. From then on, Rip Hamilton continued his hot shooting and the Knick offense fell apart. Detroit led by 8 at halftime, ten at the end of the third, and by as many as twelve in the fourth. The game did not look winnable.

- That is, until the Knick defense stepped UP. Chandler, Hughes, and Richardson all keyed in on Hamilton. They defense scrambled with the appropriate level of desperation, and repeatedly forced Detroit deep into the shot clock. In fact, if it weren't for Antonio McDyess sinking J's and grabbing boards like it was 1998, New York might've done better than a 30-20 fourth quarter edge. After 56% shooting in the first three quarters, the Knicks held Detroit to just 30% in the fourth and overtime. That's superb.

- It took two flukes of good fortune to get this one into OT. First, with the Knicks down 3 and ten seconds remaining, Larry Hughes got fouled on a 3-point attempt and calmly sank all three shots at the stripe. It was a fairly legit call, but there was no doubt that Hughes drew the contact. On the ensuing possession, Rodney Stuckey got into the lane and found a wide-open Antonio McDyess, who promptly fumbled the ball out of bounds as time expired. Oddly, the one thing that comes to mind is that NY Lottery commercial with the "Little Bit of Luck". I watch far too much MSG.

- Besides that blunder at the end of regulation, McDyess got a friendly tea-bagging from Wilson Chandler on a fourth quarter dunk. It's all punishment for collecting his paycheck from a wheelchair for his entire Knick career.

- Mike D'Antoni did the right thing down the stretch, letting Chris Duhon rest through most of the fourth quarter and extra session. Nate and Hughes got the keys and it paid off. It's still hard to tell whether Du's struggles are physical or psychological, but I think letting him chill makes everybody happy.

- After a DNP last night and very little impact in regulation tonight, Quentin Richardson was the hero of the overtime period. He hit two tough jumpers in the final minute in a half that gave the Knicks enough cushion to ice the game at the line.

- I know he's a hometown favorite, and I respect that (especially as a Walt Frazier fan), but the Palace PA guy is incredibly irritating. I respect the energy, but someone needs to un-stick his caps lock key.

- Also, way too much Kid Rock music for my liking. Not a hometown celebrity worth promoting. Not at all.

- On that note, be advised that there ain't no party like a Detroit party. 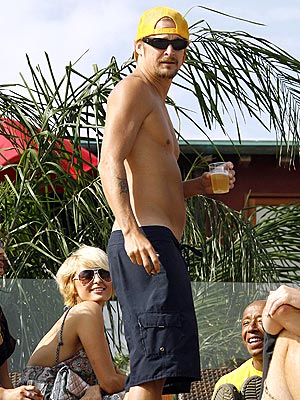 A typical Detroit party. Note that it don't stop.

- Those of you who skipped the first half missed an almost textbook chair-pull by Al Harrington, causing Jason Maxiell to miss a layup. I say "almost", because Al forgot to covertly tug on Maxiell's jersey. R.I.P. Malik Rose.

- Applause for David Lee, who bulled his way to 16 and 18 despite McDyess's throwback antics.

- Wilson Chandler looked really out of his element in the first half, but played a big role in the fourth quarter comeback and finished with a solid 17 points on 8-16 shooting.

- The same can be said for Larry Hughes, who had me screaming this, but got it together on both ends in the second half. Interestingly, Larry's improvement coincided perfectly with shedding his customary headband. Theory: Larry Hughes's headband weighs 25 pounds, hence the limited jumping ability, running like he just crapped his pants, and inability to keep up with Rip Hamilton.

- Since it was mentioned in the game thread, I should give you guys an update on my puppy situation. I'm at home this week for spring break, which means mini-dog joins in on my game-watching. So far, that's meant two things: 1. She actually watches the TV a lot, but spends most of her time snoofing under the couch and licking the carpet. 2. She chewed clean through my computer charger tonight. It's definitely a different experience than my dorm room. That said, the Knicks are 2-0 when she watches, so I may have to smuggle her back to school.

So, the Knicks made another small step forward. The bottom of the East ladder is as tight as ever. The Knicks are just a game and a half back of the 8th place Bucks, but there are four teams within that margin, two of which (Chicago and New Jersey) are tied for that 8th spot. It's not going to be an easy climb, but the Knicks have no choice but to win some damn games. Tonight, they showed unprecedented guts to do just that. It was glorious. It'll be Minnesota on Friday. Let's hope that one's not a letdown. See you tomorrow.

Update: Alan Hahn points out that the Knicks were previously 0-17 on the road this season when down heading into the fourth quarter. Big-ass win.