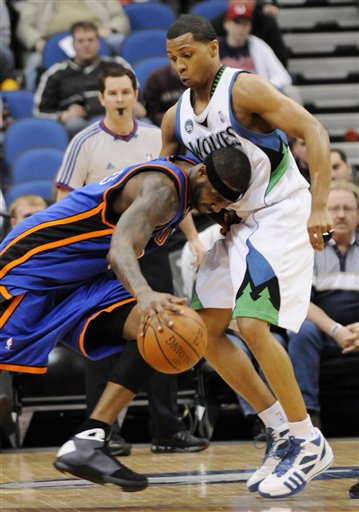 I read something today by the psychologist Steven Pinker regarding seemingly "circular" sentences. Expressions like "boys will be boys" appear tautological, but we all understand their significance. The sentence takes on meaning because of separate definitions of the noun "boys" in the subject and predicate.

I mention this because Knick fans everywhere switched off their TVs a half hour ago and proclaimed the oft-repeated mantra, "well, a win is a win!". It's not nearly as circular as it sounds. That first "win" refers to a sloppy, half-assed performance against a Minnesota team too far gone to capitalize on it. The second "win" was taking a step forward when the Bulls, Pacers, Bobcats, Bucks, and (hopefully) Nets all took steps back. Tonight, a win was a big, big win.

- We had to sweat this one out only because the Knicks simply could not buy a bucket. The team as a whole shot 39%, with only Wilson Chandler (8-16) and Al Harrington (5-9) making as many as they missed. Nate Robinson (5-15) and David Lee (6-14) weren't quite themselves, while Larry Hughes (5-15) was very much himself. Poor ball movement and some sickening three-point attempts (6-23) didn't help matters. Give Minnesota credit for defending the paint pretty well, too. (Update: "Robinson fought through a stomach virus—he was throwing up on the bench— to finish with 25 points". That explains it a bit.)

- The Knicks managed to overcome the poor shooting with improved defense and just four turnovers in the second half after what must have been a Mike D'Antoni halftime tirade for the ages.

- I chose the picture above for two reasons. One is that Sebastian Telfair is clearly getting punched in the sack, which is fantastic. Another is that ESPN calls the pictured Knick "Jared Hughes" in the caption, which makes one imagine the single most destructive possible hybrid of two basketball players.

- Al Trautwig called the action and commented from the outset on the quiet Target Center. Said Traut, "there's very little atmosphere in the building". Whether he was referring to a lack of the gases necessary to sustain life or the absence of the local rap duo, I can't say. 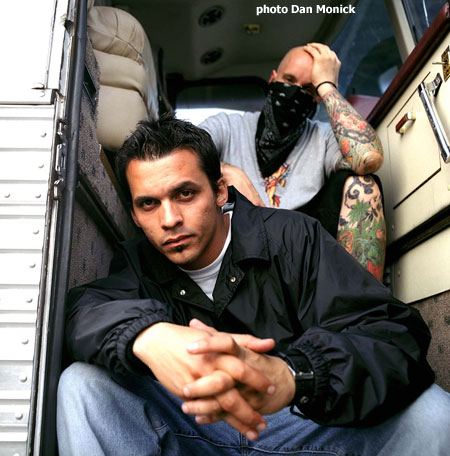 Two of the many Minnesotans not in attendance.

- Without his usual partner in the booth, Clyde used the opportunity to explore the frontier of announcing more than ever before. First, he busted out some desmology with a reference to Al Jefferson's injured "anterior cruciate ligament". Anybody else would settle for "ACL". Not Clyde. Later, he exploited repeated Knick misses off the backboard to drop lines like "No money in the bank for Nate!" and "The Knicks are bankrupt tonight!". Then, in his final feat of poetry, he addressed a story about Mike D'Antoni praying for other teams' demise by unleashing a new rhyme: "Hexing and vexing!". You're on notice, color commentators of the world. Walt Frazier just upped the ante.

- When Mark "Mad Dog" Madsen checks into the game, the Target Center PA system plays a few bars of "Who Let the Dogs Out?". Well, Baha Men, I've got your answer at last: Kevin McHale. Kevin McHale let the dogs out.

- I pray that some (very bad) team in the future will trot out a starting backcourt of Raja Bell and Sebastian Telfair.

- I thought I heard this wrong, but I just checked. The T-Wolves are, in fact, selling season tickets next year for as little as $4 a game. WHAT? I wish I was born elsewhere.

- The blue-ball feeling of seeing a fast break cut short by a non-shooting foul makes me wish that refs could play the advantage in basketball like they do in soccer. You know, you let the play continue. If the team gets a decent chance to score, good. If not, call the foul. The last thing David Stern wants is to give the refs more room to operate, but I think it might work. Thoughts?

- Mike Miller landed on his leg awkwardly at one point and looked ready to limp off the floor. The ball was still in play though, and Larry Hughes seized the opportunity to drive to the basket...where he got soundly stuffed by Miller. Ladies and gentlemen, a new low in aerial ego assault: The Gimp Swat.

- I can't prove it without video, but I'm pretty sure I saw Shelden Williams airball a dunk. Games this ugly should probably shown on tape delay for censorship purposes.

- Kevin McHale holds a clipboard much the same way an infant holds a book: "I like this, but I have no idea what to do with it!".

- Chris Duhon finally sat one out, while Al Harrington saw only 24 minutes. The first makes perfect sense. The second I don't quite understand, though Harrington did have 4 fouls.

- Very nice game for Wilson Chandler, who reminded us in his post-game interview that Wil's post-NBA career absolutely does not included announcing. He does play hard, though.

So. The Nets are up 4 as I write this, but every other 8th seed contender has already lost tonight. That puts the Knicks in the 11th spot, though they're dead even with Charlotte, Indiana, and New Jersey (for the time being) in the win column. With a near-impossible contest in Cleveland coming up, this one was important. They made us sweat, but the Knicks made some progress tonight in Minnesota. A win was a win tonight, and an important one at that.