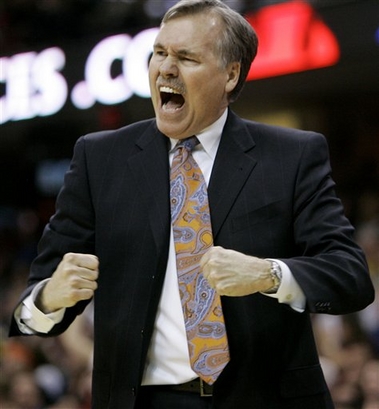 Well, it was a decent effort. Though the Knicks had won three straight, I don't think anyone expected a win in Cleveland this evening. They very nearly pulled it off, though. If they had shot at an even reasonable clip from the field (i.e. not 37%), the upset could've been had. Some quick notes:

- The main event in the Knick brick-fest was David Lee, who shot an uncharacteristic 5-16 from the field, though still finishing with a modest (10 and 14) double-double. Dave was getting the shots he likes to take, but seemed a little hasty to release with the 7'3'' Lithuanian telephone pole Zydrunas Ilgauskas headed his way. Given that Lee's been consistently productive in nearly every single other game the Knicks have played this season, I think we can forgive and forget.

- What I can't really forgive is Lee's inability to stay with his man under the basket. The Cavs like to run plays in which LeBron backs down his man on the perimeter while glancing over his shoulder. He then waits for some off-the-bal screens and hits a cutter with a one-handed bullet and everybody wets themselves over his passing ability. Anderson Varejao got open about 5 too many times because Lee failed to get over screens and didn't call for help.

- I chose the picture above because D'Antoni wears that tie about once a week. I think he wears it because it shows that he's loyal to the Knicks, but he's also here to party.

- Not to claim moral victories when we're in the middle of a playoff race, but losing to the Cavs by 5 on their home floor while shooting 37% is kinda impressive in its own way.

- Nate Robinson looked a little more himself, repeatedly beating Mo Wiliams for 20 and 7 (and only one turnover). In the fourth quarter, though, when Kelly Tripucka proclaimed it was "Nate time", the lilliputian sort of faded.

- Larry Hughes got himself three steals and a number of deflections because he clearly has LeBron's number on passes. That's good and all, but I wouldn't mind if he concentrated a little more on his own man. Mo Williams hit all five of his threes and finished with a team-high 23. Shooting better than 6-17 would be helpful as well. Not to split hairs or anything.

- I got a text from my girlfriend, who had apparently flipped on the game in the second quarter, that read "who's that fat curly-haired girl on the Cavs?". Recall an earlier New York-Cleveland game when a friend of mine came into the room, glanced at the TV, and asked why there was a girl on the court. Anderson Varejao may need a new look.

- Mike Brown must have a really stuffy nose all the time, because his mouth is literally always wide open. Zydrunas Ilgauskas must also be a bit congested, because I think he was wearing a Breathe-Right strip on the court. If there's any player who snores while playing basketball, it's Big Z. Or should I say...Big Zzzzz.

- I'll give you a second to digest that one.

- Anybody who didn't watch the MSG broadcast missed out on a prolonged, awkward, and oddly tense argument between Gus Johnson and Kelly Tripucka over whether LeBron was better suited for the tight end or wide receiver position in football. Gus cited LeBron's speed and his high school experience, while Kelly looked to his size and power. I don't especially care who's right. What got me was two grown men arguing like five year-olds on live TV. That's entertainment.

All told, the Knicks went 3-2 on a road trip that could've doomed the season. They sit a game and a half back of the 8th seed with 16 games left to play. All is not lost. The Nets come to town on Wednesday. That'll be a big one.