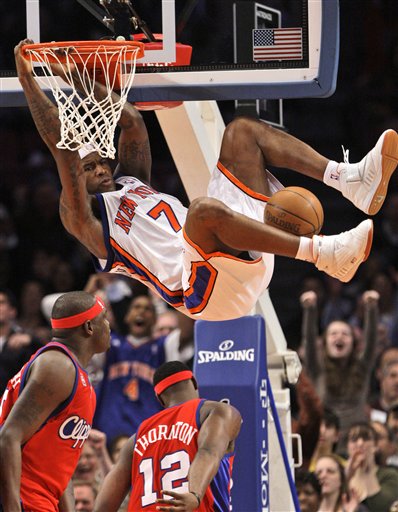 On February 11, 2009, with 25 seconds left and the Knicks up 1 against the Clippers, Al Harrington drove to the basket and converted a huge slam dunk to put New York up 3. Trouble is, his rim-hanging celebration was ruled a technical. A free throw cut the lead to two, then Zach Randolph tied the game, which the Knicks would eventually lose in overtime.

On March 25, 2009, with 27 seconds left and the Knicks up 1 against the Clippers, Al Harrington drove to the basket and converted a huge slam dunk to put New York up 3. Trouble is, his rim-hanging celebration was ruled a technical. A free throw cut the lead to two, then Zach Randolph tied the game, which the Knicks would eventually lose in overtime.

The Knicks have run out of ways to lose. Notes:

- At the outset, it looked like we'd get to see plenty of Demetris Nichols and Courtney Sims in this one, and I mean that in a good way. The Knicks finished with 44 points in a first quarter that they led by as many as 19.

- New York led by 16 going into the second, at which point the Clippers unleashed the gangly beast known as Mike Taylor. If you didn't yet know Taylor from this, you'll know him now. He's the skinniest, antsiest little rookie you ever saw, with elbows for shoulders, knees for hips, and a dribbling style that most closely resembles symptoms of caffeine withdrawal. The little punk dropped a personal best of 35 points and 8 rebounds while shooting the most baffling 14-20 I've ever seen. Anyway, Taylor's stop-motion career night was undoubtedly the difference in what was originally a blowout.

- At one point in the first quarter, Zach Randolph and Marcus Camby both went for an uncontested rebound off a Wilson Chandler miss. Their mid-air collision caused the ball to carom directly into the hoop (flashbacks to their Knick years?), thereby crediting Quentin Richardson with the least-deserved two points of his career. Q, who didn't make any attempt to board, was the closest Knick.

- Larry Johnson attended his second consecutive game, and was Jill Martin's "Gimme a Minute" interview at halftime. He claims he's watched the famous four-point play over 5,000 times. You and me both, LJ.

- I've always been intrigued by point guards' love of "walking the dog", and the Clips upped the ante tonight. Off a baseline inbounds, Baron Davis walked the dog about 20 feet up the court. He then (without touching the ball, of course) surrendered the "dog" to Mike Taylor, who let the ball roll nearly to the three-point line. Consider the bar raised in the dog-walking department. (Also, you'd figure somebody on the Knicks would- you know- pick up a ball that had rolled almost 70 feet up the court, but I digress).

- It should be mentioned that Harrington's technical tonight wasn't nearly as egregious as his last one. While the previous tech was in response to an unnecessary rim hang and a backboard slap to boot. Tonight, Harrington definitely lifted himself up on the rim, but Al Thornton was arguably under his feet, and he didn't even slap the backboard. The unfortunate déjá vu was unbelievable, but could easily have been avoided.

- I find the prospect of Tommy Carcetti as a sadistic pro-wrestler-spiting criminal mastermind rather unsettling. I don't know if that means I want to see that movie or not.

That's all I've got. A meaningless game in a lost season isn't worth getting to worked up about, but the symmetry of this one was more than noteworthy. I posted that Walt Frazier "lighting strike" quotation above, but I don't know if that even encompasses the infinitesimal odds of such a repeated occurrence. Anyway, Hornets on Friday.