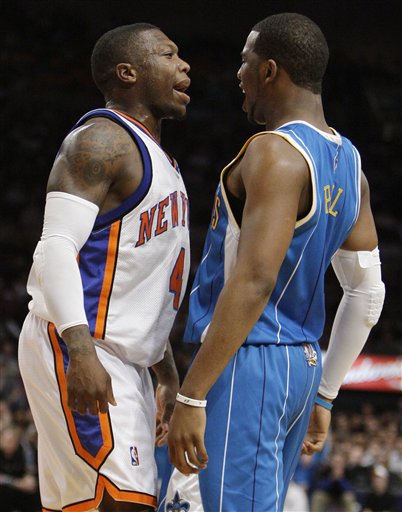 Nate and Chris look oddly amiable in this picture. I can assure you they were not. (AP Photo/Julie Jacobson)

Well, that was unexpected. Riding a losing season and a six-game streak of defeats, the Knicks took the high road tonight in New York, willing their way to a double-digit victory against the talented Hornets. I'll recap quickly:

- The Knicks hung around in the first quarter, then mailed in the second to face a 7-point halftime deficit. Nothing of interest happened. To be honest, I wasn't paying much attention. Wilson Chandler shot pretty well, David West started hot, and Chris Wilcox apparently attempted and missed a three-pointer. Whatever.

- The second half was the tits. In the third, the defense tightened up considerably while David Lee and friends got hot from the field. I'm talking four quick baskets by Lee, some good aggressive play from Harrington, and three absolute bombs by Chris Duhon.

- Duhon, in general, came alive. He dove across the scorer's table a couple times for loose balls, worked the pick and roll nicely (7 assists) and hit a couple of the aforementioned "I'm Chris Duhon, these are my massive balls" threes as well. This was vintage (circa 2008) Du.

- The third quarter was great, but let's not forget the dramatic fourth. Things got chippy as ever, with two of the league's feistiest lilliputians clashing throughout. Paul and Robinson busted out all the little man tricks: poking, grabbing, clawing...I'm pretty sure I even witnessed a noogie or two. At one point, things got heated enough that the two momentarily went toe-to-toe, prompting a double technical and some gnashing of tiny little teeth. Angry little dudes are great. I like to imagine the word "gump" was used at some point.

- I've always been fascinated by James Posey because he occasionally has truly unbelievable lapses in judgment. Well, we were treated to one of his finest this evening. Posey disagreed with a foul call in the fourth and, reacting the way any adult would, expressed his disappointment by chest-passing the ball at the referee's legs. Amazingly, Walt Frazier expressed that he didn't feel Posey's actions warranted an ejection (did I mention he got ejected? Well, he did.), which leads me to believe that Clyde either didn't see what happened or really hates refs.

- If you haven't been joining game threads because the season is long gone, please check out tonight's thread. See, when meaningful basketball fades away, the conversation turns to flightless birds and koi and gets all kinds of awesome. Don't forget the game threads, or I'll have to let this kid know you're slacking. He's not going to take kindly to that.

Anyway, tonight's game was all a Knick fan could ask for in a losing season. We got an amazing third quarter, feisty pipsqueak battles, and even an opposing player losing his damn mind in a double-digit victory. Good times. It'll be the Bobcats tomorrow night. You should come.