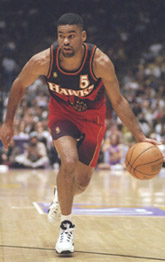 Hello, babyfaces. Tonight's New York Knicks game features the visiting Atlanta Hawks. Things were looking up after the last time the Knicks faced ATL, but have gone decidedly downhill since then. New York's gone 4-10 since that point, and Mike D'Antoni's playoff push is fading past. The Hawks are a big, athletic team, so a couple days off will hopefully boost New York's energy. The Knicks may have a slightly different look tonight. The starting lineup is expected to include Duhon, Hughes, Chandler, Harrington, and Lee. Jeffries will move to the bench while Quentin Richardson may never be seen again. Meanwhile, Nate Robinson's ankle is bothering him and we've got the newly Knicked (it's like being knighted, only for the Knicks) Cheikh Samb on the bench. Samb's an instant P&T favorite, so we'll hopefully get to see him this evening as well as a trigger-happy Danilo Gallinari.

Come on by for comments and check out Peachtree Hoops for expert Hawks analysis and some David Lee idolatry (something to which we can all relate). Also, I'll give a pack of Oreo Cakesters to anybody who can guess that mid-90's Atlanta Hawk without cheating.