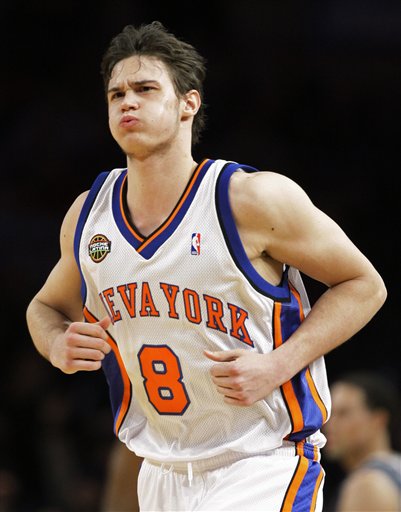 It was nearly a catastrophic Latino Night at MSG, but the Knicks held on and grabbed their second win this season against the Atlanta Hawks. With Nate Robinson and Jared Jeffries both sitting, it took a balanced effort for the Knicks to overcome the feisty Hawks. Notes:

- The Knicks won this game largely because of- get this- defense. They let the Hawks shoot very well (52%) from the field, but made up for it with hustle and active hands. Harrington had 4 steals, Hughes had 3, and the team as a whole had 12. The Knicks are shorter than just about every team out there, but they've got quickness. It was great to see guys scramble and snipe the passing lanes. Forcing turnovers leaves room for another team to shoot well (which they inevitably will) and also sets up the fast break superbly.

- Speaking of steals, Larry Hughes is quickly winning us over with his ballhawking. He's got great instincts on D, and has already intercepted passes at their release points a couple times in his short Knick tenure. That's just about the most demeaning steal there is, save for the mythical triple threat snaggle. What's that you ask? Well, it's when your opponent is holding the ball in a two-handed triple threat position and you simply snaggle it away from them with your own two hands. No swipes, no tips- just a firm grab. I'm pretty sure I've never seen it done. Anyway, Hughes still has a bit of a propensity to chuck, but good D on Joe Johnson (6-14) as well as solid offense (23 points on 9-18 shooting) has him in P&T's good graces.

- Kelly Tripucka on Josh Smith: "I liken him to a superhero who doesn't know what his superpowers are".

- I try not to laugh at the NY Liberty commercials with ladies hitting routine layups to pump-up chorus music, but it's hard.

- Gatorfriendz David Lee and Al Horford were going after each other all night, and both had solid performances. Horford put up 20 and 13, while Lee got 13 and 14 (and the W). A dream Knick frontcourt featuring those two makes me drool.

- The game-saving run in mid-fourth quarter was largely piloted by Larry Hughes running the point, with Chris Duhon playing the off-guard. Interesting.

- Highest praise goes to Mr. Danilo Gallinari, who had the best night of his young career and made me change my underwear no less than thrice. Gallo hit four of his five threes, including this nice little mambo with Zaza Pachulia. He also D'd up Mike Bibby pretty ably when he had to and looked sharp at locating mismatches. Danilo looked excellent, and I still get the feeling that we're just scratching the surface of his ability. Gallo posted his best performance yet and held court shirtless post-game. The kid's a baller. Oh, did I mention he led the team with a +14? He's a baller and a man of the people.

That's pretty much it. This would've been a much longer, more interesting recap if the Knicks had squandered their double-digit lead, which they very nearly did. Instead, we get a victory and nice, mellow recap. Good stuff. Next game's on Saturday, but it looks like we may have some good news in the meantime. Olé.