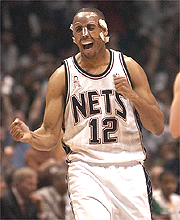 Hey, guess what I just realized? Today's P&T's second birthday! The literature says that by the age of two, P&T should be able to "talk in two- to four-word sentences" and "hold urine for three hours or more". It's safe to say we're a little behind schedule. That said, I'm really proud of how far the community and quality of discourse has come in two years, and I urge all of you to keep contributing. I say it time and again, but it's all you commenters and posters that make this site fun and interesting. P&T wouldn't have lasted two years if you guys weren't great. So keep it up.

...Which leads me to tonight. The Knicks are in the scenic Meadowlands this evening to face the dastardly New Jersey Nets. Lucious Harris and friends pose a threat to the Knicks' playoff hopes, and back-to-back losses to Charlotte and NJ would pretty much complete Donnie Walsh's lottery ticket. So, to keep this season interesting and somewhat meaningful, the Nets must be vanquished. I'm eating dinner with the grandparents this evening, so I'll very likely miss the 6 p.m. tipoff, but I'll hustle back to join you guys in late-season desperation and Nets hatred. Our very own latrell will be at the swamp tonight, and should be reporting back with some post-game thoughts on the experience. I'll probably recap as well, depending on how much of the game I see. Let's celebrate two years of P&T in style. Bring tha commentz, y'all.

(Side note: If a P&T field trip to a game ever does happen, it would make a lot of sense to hold it at the Izod Center instead of MSG. It's cheaper and we'd be much more likely to make our presence felt. Just a thought.)