The upside of losing to the Bulls...

Share All sharing options for: The upside of losing to the Bulls...

...is that it helped keep the demon-coach from the playoffs. The creature has been quietly sneaking into the playoff picture from his southerly lair. Note in the standings below that the Bulls and Pistons sit only 3 and 2.5 games removed from allowing the sadistic cave-dwelling, fire-breathing, baby-kicking savage into the top 8. Though I can only guess at the details of his grisly plans, I can guarantee that the demon-coach would exploit the national attention of a playoff berth to initiate an NBA apocalypse. I can also guarantee that the title of said plans includes the phrases "eternal damnation", "baby kicking" and "the right way".

The Knicks have an opportunity to aid their brothers in arms tonight, as they return to the Garden to face the Pistons. I'm not in favor of tanking for draft position, but this is a case in which anything short of a blowout loss would fail to serve the interests of the human race. New York must lose tonight. My proposed starting line-up:

SF: Joe Crawford (might as well get a look)

Again, it's not tanking. It's doing what's right for mankind. 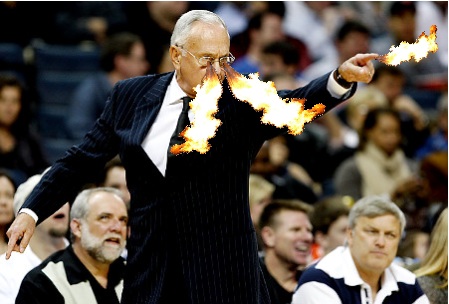 HE MUST BE STOPPED.