Share All sharing options for: Today's Workout and a Silly T-Mac Rumor

Arizona big man Jordan Hill will work out alone for the Knicks today. Since New York most desperately needs defense -and particularly shot-blocking- from a big man, I don't see the point. What are they gonna do, lob him basketballs and see if he swats them? I fully expect the Knicks to go guard at this point, and I almost wonder if this workout is a quiet attempt to scare the Warriors a little. There have been talks of Golden State snaggling one of the Knicks' coveted guards at the 7 spot, but now things are getting complicated. If the Dubs do, indeed, intend to appease Ellis (who I just can't imagine making demands like that with his sparkly little eyes, but whatever) and go big, Hill would likely be the pick. It's all very political on their end, but long story short, I don't expect Jordan Hill to be a Knick anytime soon.

Now, from one of the same articles that discussed the Ellis-Warriors story, we get this little gem:

Houston also seems to be very active in trade talk, particularly in trying to move Tracy McGrady we’re told. McGrady will be out for the first 20-30 games of the regular season, but there is some thought that he might be able to help a playoff team down the stretch, particularly since he’s in a contract year. Its tough to see how many teams would be able to absorb the 20+ million dollars he’s owed next season. The New York Knicks might be one of them. Houston would be looking for a shooting guard in return.

Now, Jonathan Givony of DX is one of the best there is. I don't think he'd broadcast something like this unless he had a decent scoop. That being said, I bolded parts of that paragraph for a reason. First of all, Isiah Thomas is no longer with the organization. I can't imagine a wise, old GM like Walsh willingly accepting a player who he knows will give him three quarters of a season at best. Also, the Knicks aren't necessarily a "playoff team" at all. Haven't been for kind of a while now. Lastly, the Knicks don't have a real shooting guard to offer in return, unless Houston is after Quentin Richardson (Edit: I guess I forgot Hughes. Sorta forgot he was on the Knicks. It's ok, sometimes he does that, too). The only way this works is if the Rockets are looking for a hefty 7-footer or a spindly defensive forward in return, you feel me? If Daryl Morey is willing to trade T-Mac's single year for someone else's two, then McGrady is welcome with open arms. We'll give him his 30 games to sit out, cheer him relentlessly throughout his 4-month Knick career, and maybe even name a baby gharial at the Bronx Zoo after him. 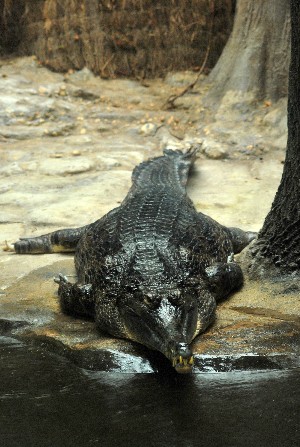 This is Tracy. His diet consists of insects, fish, and expiring contracts. (Photo: Brian Switek)

So, unless I've seriously misjudged Donnie Walsh's motives, expect neither of the two guys making news today to become Knicks this summer. Although you never know.