Share All sharing options for: Darko, Hill, and Ghostface: Appraising The New Knicks

I've had almost 24 hours to steep in last night's events. Let me see if I can summarize what I'm taking from Draft Night '09.

Depending where you look, you'll learn that Jordan Hill is either a great big man in the works or a telephone pole: the next Amare/Bosh or Mikki Moore lite. How Hill develops and embraces Mike D'Antoni's system remains to be seen, so I'd rather tune out the critics and zealots alike and concentrate on what we need from him. What is certain is that he's nearly 7 feet tall, has two working arms, and is relatively comfortable in the painted area. He might bring a little intimidation factor to the front line. The same can't be said about pretty much any other Knick before yesterday, so that's a start. Even better is the trade that Donnie Walsh managed to swing last night. Darko Milicic has an expiring deal, sure, but he's also a big, pissed-off guy who's willing to defend. Between those two, the Knicks went from perilously undersized to flexible in the frontcourt in one night, all while sparing the payroll. That's good management. I was among the boo-birds when Hill got picked, but hey, I forgive easily.

By the way, the Knicks better be faxing Charles Oakley a contract as I write this.

Toney Douglas wasn't touted much for whatever reason. Maybe it's because he's been around awhile. I personally see no reason why he can't be as effective as Tyreke Evans, Jeff Teague, or any of the "combo" guards taken in the first round. I don't watch much college basketball, but a number of you do, and everyone's said he can score and defend like a champ and run the point if necessary. What am I missing? Did he kill a hooker and nobody told me? The Douglas pick gets an A+ from me (or an 11 on the scale I offered earlier) and presents a silver lining for my next point.

I'm not going to fault Donnie Walsh for missing out on Evans, Rubio, Curry, or Flynn last night. It sounds like he was hard at work making offers, but couldn't quite pull off a deal. D'Antoni's comments make it clear that New York was targeting Curry, but it just didn't happen. Remember that Walsh isn't playing with a full deck until July, when David Lee and Nate Robinson hit the market. What does irk me a little is Walsh passing on Brandon Jennings. I guess we'll never know how Young Money would've fared in the Big Apple, but my imagination tells me that the intersection of Jennings' mouth, D'Antoni's offense, and the New York media could've been glorious. Oh well. Walsh played it safe, but you've gotta wonder what could have been. (Side note: I was one of many to laugh at the Skiles-Jennings pairing last night, but don't forget that Skiles was a bit of a punk in his day. And not in the "he thinks he's so cool" kind of way. More like the "he did jail time" kind of way. I won't be surprised if that little bastard takes a liking to Jennings. He may be a stickler, but I bet he appreciates a brash, young point guard. I'm likely wrong about that. Jennings just sets my imagination afire. Should probably pause there for good measure. Just in case.) Anyway, by passing Jennings, the Knicks opted not to swing for the fences. These things happen. They also neglected the point guard hole, which is why Ghostface makes me happy.

So, I'm not ecstatic, but I'm satisfied. The pangs of lust and possibility of bliss may very well return next week, when the Knicks will likely pursue Ricky Rubio. For now, feast your eyes: 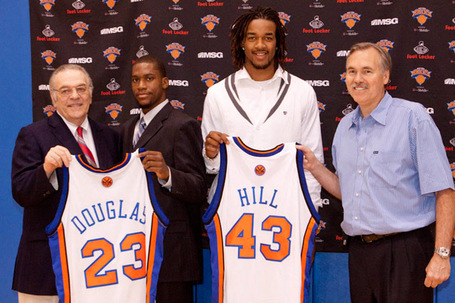 A couple side notes:

- Farewell to Quentin Richardson, who's always been a good teammate and a fierce competitor. Q's done some good in orange and blue, but we all knew he was the odd man out on a team that's deep and young at his position. I'm ever so slightly saddened to see his jersey number gobbled up so quickly, but- oh wait- yup. Now I'm over it. Best of luck to Q, who's been classy as ever about the whole thing.

- I'm fully prepared to work the nickname "Ghostface" to death. If you don't get it, check here (and then check yourself. Jeez). It's gold. "Pretty Toney" will get plenty of play as well. Hill's nickname will come in due time.

And there it is. My thoughts on the Knicks' 2009 draft are now in writing. It'll be interesting to look back at what we said next week, months from now, and years down the road. For now, it's Darko, Hill, and Ghostface. Appreciate it.