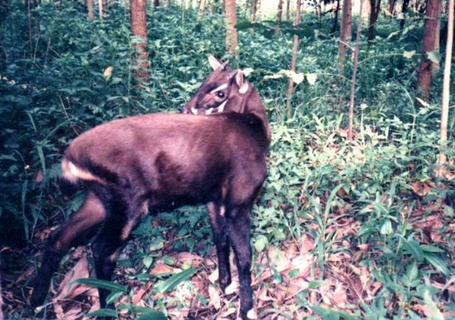 It's a quiet day in August, so here I present a few quick links and one of the rarest bovids on the planet.

- First of all, Jason Williams worked out yesterday, and the Knicks are still negotiating with Ramon Sessions. Nothing new there, although I would emphasize the following quotation from that Berman article:

Walsh said Williams is not necessarily being viewed as a backup.

"A guy who has started his whole career shouldn't be called a backup," Walsh said.

That sounds like Walsh trying to boost a guy's trade value, if you ask me.

- Meanwhile, the Knee Jerk NBA blog does its own player comparin', and decides that David Lee might resemble a certain jheri-curled power forward. (For some reason, I think I remember learning that Michael Cage has a tattoo of a rose on his ass. I have no idea where I heard that or if it's at all true.)

- Check out the Disciples' conversation with Bomani Jones. Clearly, the big names heard my performance on the podcast and decided it was legit. I'm that magnetic.

- Checking in with our old friend Dan Grunfeld, who will join the Romanian national basketball team, and who I just realized grew up like 15 minutes away from me.

- One thing worth recognizing about the recently released schedule: It's interesting to us, but for writers and TV personalities, it's a map of where they'll be spending the next 8 months or so.

That's it for now! Have a great day and let me know if you see any saolas in the woods.