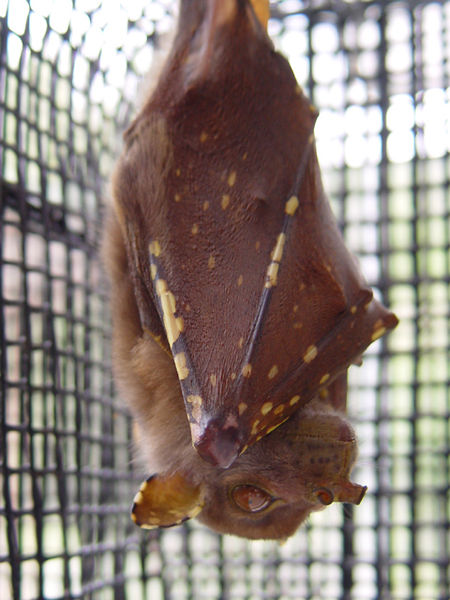 Good morning, mallomars. It's GAME DAY, y'all. Before the Knicks suit up for their first stateside preseason game against the Celtics, let's take a stroll around the internets.

Take my hand and jump.

- First of all, through years of mammalian links, I've never done bats before on P&T. Why? Well, because bats are bugs. That said, a P&T friend emailed me with this cool guy and seeing as it's Halloween month, I just couldn't resist. For the record, the above tube-nosed bat is a different species from the one in the article. Just as tube-nosed, though.

- As Howard Beck blogs, the Knicks will not only forego morning shoot-arounds at home this season, they'll also arrive later to the arena to avoid excess downtime. Click the link to read a little more on why that's the case. I always enjoy little peeks into the business that goes on behind the scenes of the game day presentation.

- Via Gian, Bill Walker projects to have the best TS% in the NBA this season. Might as well start engraving the MVP award now.

- Charlie and I saw plenty of Anthony Mason milling about the practice facility during training camp, and it turns out that the Knicks will be utilizing his services to work Eddy Curry back into shape. So...yeah. Cool.

"I think he needs to be more aggressive on his catching and shooting, catching and ripping, passing the ball, going to the basket, yeah," Mike D'Antoni said after yesterday's practice at MSG Training Center. "And we talked about that. For him to go to the next level, it's not changing his game. It's changing your focus and not wait for the game to get close and now I'm going to really turn it on. When you play 25 to 30 minutes, it has to be the hardest 30 minutes you've played in your life. That will get him up one more level."

- In case you had doubts, Frank Isola reports that Timofey Mozgov will start tonight. Shaquille O'Neal may not.

Mozgov, who speaks little English, said he wouldn't mind if the Garden PA played Russian music after he scored.

- Here's the superb Howard Beck on the other side of the mic with Mike Kurylo of Knickerblogger.

- The new FreeDarko book now has a website teasing some of its pants-wetting graphics. One of them is an exquisite '70 Knicks design. (Update: IT'S FOR SALE!) Oo-wee, am I excited for that book.

That is all. See you at gametime.