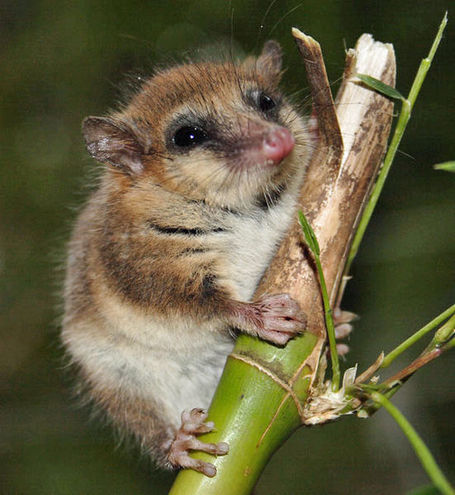 Good afternoon, robocops. I was going to keep my mouth shut today in preparation for tomorrow afternoon's exhibition against Armani Jeans Milano (over which I am terribly excited), but I've read too much interesting stuff over the last day to let the sun set without any mammalian links.

If you're having a lazy Saturday, take the jump and have a look around.

- Monitos del Monte aren't little monkeys at all. They're marsupials! I'm appalled that I've never used them for links before.

- Speaking of AR, he, Amar'e Stoudemire, and Ronny Turiaf found their way into this terrific post-media day FreeDarko post.

- Howard Beck and Marc Berman both filed (from Milan) Wilson Chandler articles worth reading. Here's a bit from each:

The Knicks have better shooters and playmakers available. But Chandler is young (23), steady and improving, and his size and strength bother opposing guards. Chandler fits in the backcourt, "so as long as we have enough playmakers on the floor, and enough ability to create shots, which he’s better than what you think at it," D’Antoni said.

Coming off a second straight ankle surgery and summer hernia surgery, Chandler didn't start playing at full speed until early September, and it shows. Despite bulking up in the off-season, his outside shot looks as limp as overcooked Milano pasta. He's still wearing the blue jersey of the starters, but for how long?

"My rhythm is definitely off," the normally reserved Chandler said yesterday after practice at the AJ Milano practice site. "I had to work on my health first. I'm just getting back to the court now, getting my timing back. "

- More from Berman on Mike D'Antoni and his wife, Laurel, who are revisiting the city in which they met. It's sweet, gushy stuff. Kinda bummed I wasn't invited to their reunion dinner.

- I don't know how I missed this, but Walt Frazier is reeling in Harlem properties to supplement his pad in St. Croix. What of it?

- Via Alan Hahn's most recent Fix (which is chock full of facts), here's your starting lineup for tomorrow:

No surprises there. Alright, I'm off to see this stupid-ass Facebook movie (Update: It was frighteningly good.). Have great days, y'all.