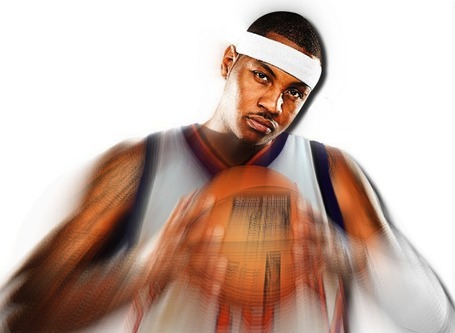 Having Sportscenter playing on the television this late at night sometimes has it's benefits. While watching a cued up re-run of Dexter on my laptop I glanced to the television only to see that no more that 15 minutes ago as I type, Chris Sheridan reports a 3 team trade possibility sending Carmelo to the Knicks. The third team is currently unknown but it is thought that said team has an asset Denver has had their eyes on. It could be the mystery team we supposedly had a trade lined up with for a 1st round pick or possibly a complete dark horse straight out of left field that no one was expecting. Here are pieces of the late night report.

The New York Knicks have made significant progress in recent days in their efforts to acquire Carmelo Anthony from the Denver Nuggets, a source told ESPN.com Tuesday.

After a period of dormancy following the collapse of a four-team trade late last month between New Jersey, Denver, Utah and Charlotte, the Knicks got back in on the bidding about two weeks ago after Anthony made it known to the Nuggets that he would not budge on his refusal to sign a three-year, $65 million contract extension with Denver.

The offers the Knicks have proposed have always centered around packages including Anthony Randolph, the expiring contract of Eddy Curry and a first-round draft pick they would acquire from a third team, and New York has softened its stance on including forward Danilo Gallinari in a trade.

The most recent obstacle, according to the source, was for the Knicks to use one of those assets, likely Randolph or Gallinari, to acquire a player from a third team that the Nuggets value more highly than either of the Knicks forwards. The source said that obstacle can now be overcome, with the Knicks confident they can get their hands on a player the Nuggets would prefer.

There were no concrete indications regarding whether the Nuggets were inclined to deal Anthony prior to the opening of the regular season next week. But the rekindling of trade talks two weeks ago coincided with the Nuggets' hiring of salary-cap specialist Pete D'Alessandro.

The Knicks would have to part with an additional asset or two to acquire a first-round draft pick to include in any deal with the Nuggets, and one New York player who has increased his value in recent days is backup point guard Toney Douglas, who had 24 points Tuesday against New Jersey after scoring 23 two nights earlier against Washington.

Don't go busting my balls for typing Carmelo's name, just in case he pops up in a Knicks jersey against the Philadelphia Sixers you'll now know why. Sleep well toasters. Oh, and read the full artic le (here). Back to Dexter, wonder who he'll be killing next...

Poll Update : The war has begun, the battle has yet to subside, who must Denver keep their hands off of?

Besides the obvious Amare Stoudemire and Raymond Felton, who is your untouchable?