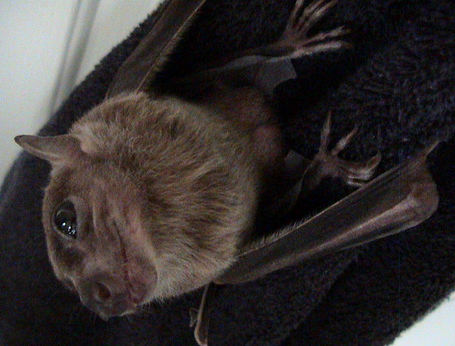 Well, hello everybody. I've been out and about for the last 24 hours, so I figured I'd dump a few of the links I've had piling up before tonight's preseason finale against the Raptors.

- Bat month continues with Egyptian Rousettes, which are A. Friggin' everywhere in Africa and the Middle East and B. A reminder that if you strip them of their wings, bats are just little doggies.

- Before we get into links, I'll just remind y'all that I'll be saying things live on WCWP Sports, as I'm wont to do every Friday, tonight at 6:30. Tonight might be the night I drop the world's first radio nip slip, or it might not. You'll have to listen.

- Toney Douglas (shoulder boo-boo) and Danilo Gallinari (wrist boo-boo) will both sit tonight, but we're assured that neither has a serious injury. Take that for what you will.

- Douglas is one of several in contention for a starting lineup that, even with the preseason expiring, still hasn't been decided.

- Terrific wordsmith and friend-of-P&T Will Leitch talks Knicks with the venerable Thomas Dee. Learn about the Knicks and how to sit in a chair like a pro.

- On that note, Will introduces us to Danilo Gallinari.

- I never really tackled the Gus Johnson firing. Thankfully, Joey took care of that for us.

That's all for now. I told y'all it would be quick. I'll be back in a jiffy with your game thread and some treats*.

*There will not, in fact, be any treats.