Share All sharing options for: Pre-Game Hysterics: Knicks at Raptors- 10/27/10

Good afternoon, la-z-boys. With the tip-off of another Knicks season just hours away, I'm just wriggling with excitement. Consider this post my outpouring of said excitement and a thread in which you can all join me.

- First, some bad news. The word now is that Anthony Randolph will be out for a week with a sprained left ankle. Although it's the same ankle on which he once had surgery, Anthony assures us that this is a small, distinct injury:

"I'm feeling much better today than I did yesterday," said Randolph, who missed the final 47 games of last season with torn ligaments in his left ankle -- the same one he re-injured Tuesday. "It wasn't as bad as it could have been. The other injury is healed up fine. It's healthy."

I won't sleep soundly until Anthony is actually suiting up and ready to go, but this doesn't sound like a major issue. It wouldn't be opening night without some minor setbacks. 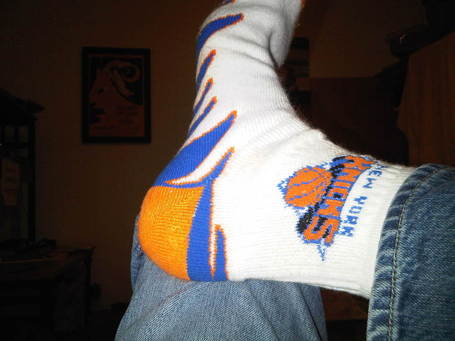 - Have you read Osborn's preview of tonight's game? I told him to post it yesterday because I'm a dullard, but it's good preparatory reading. Print it out and take it for a poop, why don'tcha?

- Speaking of Osborn, SBN has a terrific blog about velociraptors. They also previewed tonight's game.

- I tried to articulate all of my thoughts about Landry Fields starting into a post last night, but circumstances prevented that from happening. Let's just say that decision has really grown on me. I do worry that Fields won't stretch the floor enough for Amar'e Stoudemire, but his steady defensive presence and intelligence away from the ball have to be a positive addition to that unit. I can also envision Wilson Chandler really putting in work once the starters take their first breaks. One or both of those guys is going to have their hands full keeping DeMar DeRozan, Sonny Weems, and those other athletic Raps away from the rim and offensive glass.

- I told the WCWP friends last Friday that I wouldn't be surprised if Danilo Gallinari put up big numbers tonight. 25 points on 5 or 6 three-point makes after a weak preseason just seems like the kind of stunt Gallo would pull. Wouldn't that be splendid?

I don't know that any of this merited a post, but I sort of like having this mid-day forum for everybody to voice their pre-game feelings. I might do this more often. Tip's at 7. Game thread will be up within the 6th hour. See you there!