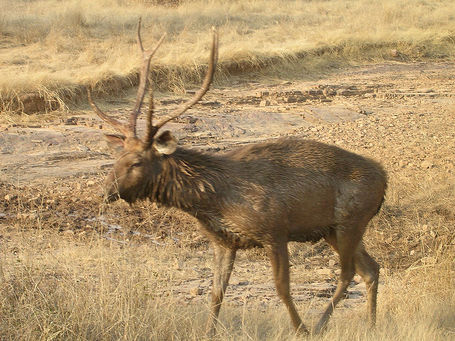 Good afternoon, primapes. Before the Knicks face the Timberwolves tonight (a MUST-win, but, like, really this time...), why don't I flood you with odds and ends from around the internet? You'd like that, wouldn't you? Mmmmhmmm.

Take the jump if you dare.

- First and foremost, Marc Berman twat that Ronny Turiaf might not be back for a minute. This is not excellent.

- Second and soremost, "sambar" is not only a South Asian/Australian deer, but a South Indian and Sri Lankan vegetable stew. The deer and the dish are, as far as I can tell, totally unrelated.

- After days of us bitching about the Knicks' game plan, it's cool to hear from the players and coaches themselves. As Barbara Barker of Newday reports, the team's focus has been on spacing:

"Offensively, the biggest thing that we don't do is we don't keep our spacing and we're jamming everything up," coach Mike D'Antoni said after reviewing the tape of Wednesday night's 122-117 loss to Golden State. "It's why Amar'e had turnovers. That's why Raymond can't do the pick-and-roll. We've got guys clogging the lane and the spacing isn't good."

- In the same vein, Mark Hale of the Post finds that Landry Fields is one of those Knicks that needs to adapt to playing alongside Stoudemire:

With Landry Fields, Mike D'Antoni explained that the rookie's instinct is to be forever cutting on the offensive end. Fields is always moving.

That probably seems good. But it's not.

"He needs to cut sometimes. But he's cutting all the time. You have to understand when it is to cut and when you don't," D'Antoni said yesterday. "Because otherwise you cut right into Amar'e [Stoudemire] and you mess Amar'e up."

- We all saw Wilson Chandler spit his toof out, but it turns out I WAS RIGHT and part of that toof was, indeed, in David Lee's arm, and it got infected. Gross.
- Sir Thomas of Dee and ESPN's Jared Zwerling discuss the Knicks' losing streak and their prospects for tonight.
That is all. More later, friends.