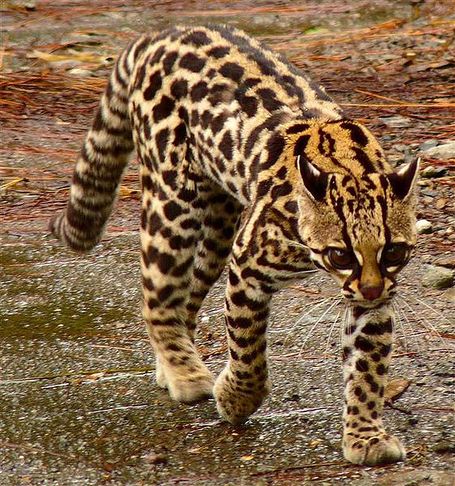 Good afternoon, pansies. The Knicks are in shambles and the fans are wielding pitchforks, but there's some really interesting stuff to read if you know where to look. Luckily for you, I know where to look. Take the jump!
- Since today is all about oncillas, I'd recommend that you read up on eyespots.
- If you read one thing today, read Knickerblogger's by-the-numbers breakdown of who the Knicks are 1/8 of the way into their season. It's important for us to immerse ourselves in information like this so that we can partake in intelligent discourse. It's also important that we wear monocles at all times. Wait, are you not wearing one? Anyway, that KB post is full of useful stuff. For instance:

Despite D’Antoni’s reputation as an offensive-minded coach, it’s the Knicks defense that is leading the team. New York is 11th in defensive efficiency, a huge improvement over last year when they tied for 27th. Breaking that down into their four factors, the Knicks aren’t doing well in getting opponents to miss shots (50.5 eFG, 21st). However they are average or better in forcing turnovers (16.9 to rate, 9th), grabbing rebounds (26.6% reb%, 13th) and giving away free points (23.7 ft/fg, 15th).

- Not only is there a new D o' C podcast up (which I'm enjoying as I type), but our Kenneth Paul Drews (henceforth known as KenPaDre) posted his 7 ways to fix the Knicks. Here's number 5:

Tie Wilson Chandler and Anthony Randolph to chairs and force them to watch tapes of Lamar Odom playing his best basketball (any game from this season will do).  Having an offensively skilled perimeter guy so completely throw himself into dirty work is infinitely more valuable than a guy who is only effective when his perimeter jump shot is dropping.  Chandler and Randolph’s identities should be that of role players who happen to have offensive ability instead of offensive players who happen to be able to rebound and play defense.  That mental distinction is important not just for those players, but for the entire team.

- Panic mode or no panic mode, Will Leitch says the Knicks still have some leverage in the duel for Carmelo Anthony. I'd recommend reading the article three times in each of the three "text size" options. I found that it gave each reading a different eyefeel.

- Within this article about Ronny Turiaf's (massively important) absence lies this bit of news that I saw a few beat writers tweet while I was in class:

[D'Antoni] summoned co-captains Amar'e Stoudemire and Raymond Felton separately into his office, desperately searching for solutions. They can only hope Turiaf will be one.

I wonder what was said and kind of wonder why it took this long, but hopefully we'll see less moping and more on-court leadership from the co-captains.

- For whatever reason, I haven't mentioned anything about Donnie Walsh's hip surgery yet, but most of the relevant information is here. Walsh goes under the knife on Wednesday. We wish him the best of luck and a speedy return to his feets.

- I will now close this post with a pretty terrific line that Danilo Gallinari just twat (and not because it could be misconstrued as obliquely related to trade rumors).  I hope everybody is having a splendid day.

First stop denver...hope they have some good restaurants in there..