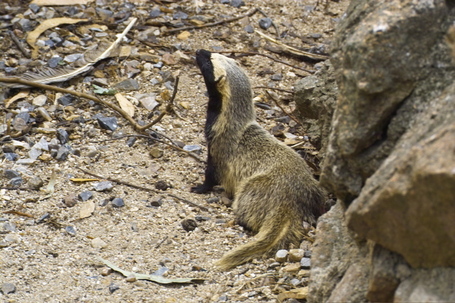 Good afternoon, squeegees. While the Knicks transition from the mile-high atmosphere of Denver to the fiery pits of Sacramento, let's pick some fresh fruits and vegetables from around the internet.

- Apparently, the grison (two species that make up the genus Galictis) is also known as the "South American Glutton". Our next project is to determine which South American basketball player deserves that nickname.

- Will "The Thrill" Leitch's most recent Knicks Power Rankings went up yesterday. Here's a snippet that'll make you go "HMMM.":

Douglas has sort of been a microcosm of all the Knicks' problems so far: better than expected on defense, and save for a few outbursts, far, far worse on offense.

"He's definitely getting a fair opportunity to be what they want him to be," Harrington said. "Hopefully he'll accomplish that. I'm a big fan of Gallo. I was a guy that got guys off him in the locker room. Everybody felt that way. It was tough on him. He wasn't asking (to be treated like a star), they gave it to them. To his credit he never got a big head about it. I always pulled for him. I hope he does become what they want him to become."

- Here's a very cool piece by Barbara Barker of Newsday on Landry Fields, his family, and his path to the NBA. Just in case you didn't already want to muss Landry's hair and give him a lollipop:

Steve knew that his son was serious about doing what it took to become a player when Landry taped a poster to the back of his bedroom door in sixth grade. It wasn't a poster of Kobe Bryant, then a young star with the Lakers. Nor was it the basketball schedule of his AAU team. Instead, it was a chart of what classes he was going to need to take in order to get into various colleges in California.

If I were better informed, I'd make a joke about USC right now.

- Meanwhile, our friend Max Caster at WCWP asks: What Would Landry Do?

- Over at TrueHoop, some guy named "ESPN Stats & Info" (Are all-caps names fair game now? Is the ampersand the new hyphen for double-barrelled surnames?) noticed that the Knicks managed to surpass the Nuggets in almost every statistical category but the one that counts: points.

They made more field goals.

They made more 3-pointers.

They had more rebounds.

They had more assists.
They had fewer turnovers.

And they had more blocked shots.

The Elias Sports Bureau told us that the last 266 times a team outperformed its opponent in all of those statistical categories, that team won the game.

Over at B-Ref, Neil Paine is all like "use fancier numbers, Mr. Stats-Info", while here at SBN, Mike Prada is like "what about free throws?".

- BK is an expert at identifying subtleties of basketball that make you say "Ohhh yeah, I've seen that but never really given it much thought." Example:

...one of the subtle pleasures I derive from closer observation is the way D'Antoni uses guard screens everywhere around the floor to free weak side shooters and players for a quick hit drive to the basket. Last night, it was Felton sliding over from Billups in front of him to jam Melo after handing off to Chandler, giving Wilson enough room for an easy drive from the right elbow straight to the hoop.

Take note of that for the future.

- The keen Sebastian Pruiti shows us how Danilo Gallinari's moment of hesitation got him dunked on last night. If I'm not mistaken, Gallo wrecked himself because he checked himself. That's a new one.

And I'm done. Tip-off isn't until 10, but I'll probably have the game thread up a few hours early so we can talk about our dinners. Enjoy the rest of your day.