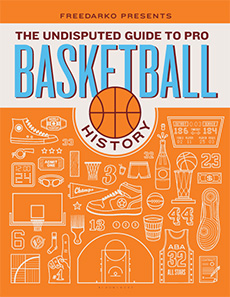 It might surprise some of you that I know how to read, but I do. Sometimes I even read chapter books and books with few or no pictures. One such book is The Undisputed Guide To Pro Basketball History, the sophomore effort (I've ALWAYS wanted to use that phrase) from the weird, wonderful gang called FreeDarko.

Take the jump to read a short review of the book, which is available here.

Working under the assumption that some of you don't know about FreeDarko, let's start with a quick background; a personalized "About the Authors," if you will. FreeDarko is a shape-shifting clan of diehard basketball fans who approach the professional game as a creative endeavor, an intensely personal experience, and, in some ways, a stormy little snowglobe of society. It's often bizarre, not always easy, and it tends to synapse in brain areas that rarely deal with sports. That doesn't come close to defining the endeavor, but suffice it to say that, as someone who grew up preferring Doug West to Jordan and who regularly uses ARKive videos to explain my love of certain players to others, FD has always been riiiiiight up my alley. I love it. Or them. Whatever.

Now, imagine the entirety of professional basketball history as seen through that lens. History takes you from Naishmith, Barnstormers, and Mikan to Nellieball, Shaq-Fu, and YouTube in a couple dozen essays, with those threads of playing style and extra-basketball impact throughout. The book is decidedly and admittedly un-comprehensive, panning rather quickly through the last century with checkpoints along the way. Each roughly decade-long chapter contains tall tales of individual players, teams, or moment and motifs in history. The authors give equal billing to the figures that defined each era and those that advanced, transcended, or even missed out on it. If you're familiar with FD, you can look forward to the usual totemization of ballplayers and obsession over intricacies in kinesthesia. Aesthetics are not as much of a focus as in the previous book, but fans of the Almanac's style guides won't be disappointed (Dr. Lawyer Indianchief., for instance, refers to Manu Ginobili's transition "from kicking fetus to glorious pest"). The book's most delightful moments are its diagrams and insets, which spin previously intangible tenets of each era like trades, afros, and shoving matches into gorgeous graphs. A histogram of '70s hairstyles or a web chart of '90s fights is fun and cheeky until you realize that it's painstakingly thorough and empirically legit. I realize now that I haven't done any of the book's elements justice, so I won't even try to describe Jacob Weinstein's illustrations (some examples). They're just amazing.

Your Knicks make several appearances in the book (since the Knicks have apparently made some history). A piece by Bethlehem Shoals plunges into the rosy mythology of the Red Holzman Knicks, dissecting the familiar cast of characters- Reed, Frazier, DeBusschere, Monroe, and Bradley- until it's obvious why old people won't shut up about them (if you are one of these old people, know that I say this out of love). Patrick Ewing's teams make an appearance in Dr. L.I.C.'s essay on the age of MJ, "when second-best was good enough." Our greatest indulgence, however, comes from Joey Litman, a Knick fan, blogger and a frighteningly sharp wordsmith. Joey's essay on the Knicks-Heat rivalry takes us back to a time when two artificially assembled squads of previously disparate individuals would put on different-colored shorts and try to murder each other each spring. It's a vivid recap of an event that most people my age didn't fully grasp at the time, though we sensed that it was perverse and perhaps too real for our innocent eyes.

I don't know, friends. I've found it quite difficult to review the second mainstream realization of an entity that's meant so much to me since I discovered it a few years ago. I kind of want to delete this whole post and just say "go buy this fucking book," but that probably wouldn't be nice, so here we are. The Undisputed Guide to Pro Basketball History isn't "NBA History 101." It's more like "NBA-307: Basketball History Through the Eyes of Brilliant, Obsessive Miscreants," an impressively balanced selection of historical fact and zany FreeDarko campfire stories. It's really good, too.