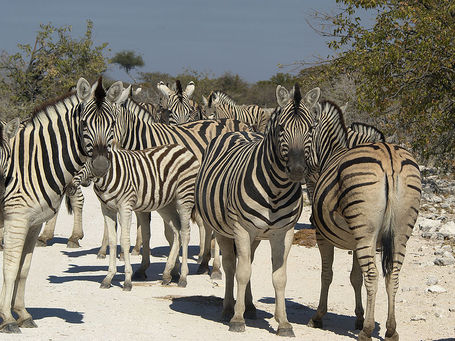 Good afternoon, hambones. I hope you all had had pleasant, victorious weekends just like the Knicks did. Many thanks to flossy and Gian for superb recaps of the Friday and Saturday games. I watched those two on the DVR last night, and must say I enjoyed myself immensely. There's nothing better than watching the Knicks play without having to sweat. A back-to-back with the Robertcats tips off on Tuesday. In the meantime, here are some links.

- I watched part of "Great Migrations" in bed last night, and have been thinking about zebras ever since. Can anybody draw a really good zebra? I cannot.

- When Knickerblogger checked the Knicks' four factor rankings earlier in the season, they found a surprisingly good showing in defense with a relatively weak offense. Now? That's more like it.

- In his debut at Basketball Prospectus, the brilliant Sebastian Pruiti dissects Raymond Felton's pick-and-roll troubles. You ought to click through for the full article and some video, but here's a snippet:

The biggest problem I have seen in Felton when he runs the pick-and-roll is his decision making. Coming off of that screen Felton just seems to make the wrong decision (in terms of hitting the roll man or attacking himself), and these poor decisions lead to turnovers (Felton has turned it over on 14.9 percent of his pick-and-roll possessions). It is almost as if he predetermines what he is going to do before even coming off the screen

- As the Knicks head to Charlotte this week, Rufus on Fire looks back on the Raymond Felton era. Whenever you have sloppy seconds on a player, it's worthwhile to see how he is/was perceived by his previous teams.
- Meanwhile, I don't know about this headline (I rarely do), but the return to Carolina is certainly a big deal for Felton.

- Shoals and Eric Freeman talk numbers. Amar'e Stoudemire is mentioned. What number would you wear if you played in the NBA? Reply in the comments so I can tell you that you're wrong.

- Amar'e Stoudemire was player of the week this past week, which is neat.

Kelenna Azubuike is practicing again, and he's pretty jazzed about it.

That's all, y'all. Smell ya later.