This is the second in a series of three sponsored posts. See the first one of these for a little explanation.

Last week, we kicked off our examination of how technology, and particularly the omnipresent time-waster they call Twitter, "enhances" our "experience" of watching Knicks basketball. The assumption here is that having access to players' innermost thoughts gives us hints about their mindset and demeanor when they take the court each night. Much of a Knick's output can be explained- even predicted- by the desires, dreams, and demons (and dachshunds, in Bill Walker's case) that follow him onto the court. Let's take a look.

Laffs aside, this is actually pretty interesting. It always intrigues me to hear which players my favorite players admire. Allow me to draw some stretch conclusions here, if I may (since that's sort of the theme of this whole exercise). This tweet was twat on November 1st. The Celtics were not playing at the time, nor had they played the previous night. This leads me to believe that our beloved Wilson was studying film of Pierce, discussing Pierce's style, or at the very least, pondering what makes Pierce great. As much as I loathe Paul Pierce, a lot of things he does would be nice additions to Chandler's already stellar repertoire. Wil's not nearly as polished a shooter as Pierce, but if he could master the stutter step and pump fake (skills which are totally underrated by the people), he could open up worlds of offensive possibilities and probably get to the line more often. I love Chandler's deliberate, determined style, but a dash of deception might be just the ticket. Of course, Wil probably tweeted that half asleep whilst wedgie-picking with his other hand, so forgive me for getting overexcited.

bday cake.. this is about to be how it goes down hahaa http://bit.ly/dhHJ3i http://twitpic.com/33bmfa

To save you some clicks, here's what Andy wanted you to see: 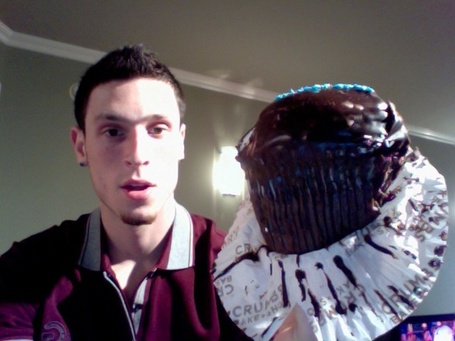 Nice. That's a grown-ass cupcake for a grown-ass man. Chocolate is always a good flavor. And it's from Crumbs, no less. They make a nice cupcake.

Exhibit B is the kicker:

It doesn't take much Twitter divining to deduce that Andy Rautins is THE COOLEST BRO ALIVE. The man just broadcast a totally apt and legitimate reference to Matilda to nearly 3,000 followers. Rautins should start at all five spots, then replace himself off the bench when he gets tired. It doesn't get more badasser than Matilda. The Trunchbull is so evil!

Anyway, next time you see Wilson Chandler fake a defender out of his shoes (or flop) or Andy Rautins shoot a jumper telekinetically, you'll be prepared. Twitter holds all the answers. Consider your NBA viewing experience ENHANCED.