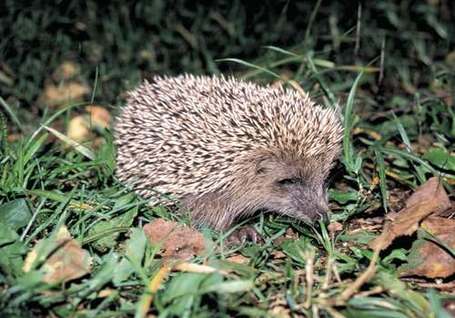 Good afternoon, denizens. As the Knicks prepare for an asbestos-free battle with the Wizards and we prepare for a lively real-life game viewing, why not peruse the rest of the internet?

Take the jump for a handful of splendid links, as well as the basic info for tonight's meet-up.

- Amur Hedgehogs and their European relatives are not known to be susceptible, but did you know that certain kinds of (domestic) hedgehogs can be stricken with a hedgehog version of MS? You've never seen a cuter name for a sadder disease.

- Kevin McElroy's notes from last night's game include some interesting thoughts from Ronny Turiaf and some insight into how Mike D'Antoni plans to utilize a healthy Anthony Randolph.

- I absolutely refuse to invoke the I-word at this point, especially after my Knicks just won on the road to pull to 2-2. Tom Ziller, however, takes a look at the Ian O'Connor story you've probably all seen. Bethlehem Shoals, meanwhile, examines Steve Kerr's foreboding words about Amar'e Stoudemire during last night's TNT broadcast.

- Making a guest appearance at Disciples of Clyde (P&T's podcast of choice), the wonderful Jonathan Fishner attempts to exorcise the specter that haunts all Knick point guards...THE GHOST OF WALT FRAZIER:

He is not actually dead, of course; one could argue he has never been more alive, still wearing flashy suits while announcing Knicks games on MSG, spending each offseason at his five-acre, ten home estate in St. Croix and playing real estate mogul, buying three Harlem penthouses for $2.4 million this Fall. Yet, in a trick only Clyde Frazier is capable of, he is also a ghost, controlling the mind and destiny of every Knick point guards who has strived to replace him.

Read on to see how Chris Childs, Derek Harper, and all of your favorite Knick point guards got spooked by the phantasmic Frazier.

- I wasn't talking out of my poopbutt when I said the Bulls did a great job stifling Amar'e Stoudemire. The oft-brilliant Sebastian Pruiti went to the tape to demonstrate how Chicago neutralized the big man.

- Just to reiterate: Tonight at 7 PM at this place right here, we will be gathering to watch the Knicks face the Wizards. Charlie (Osborn) and myself might arrive a little after 7, so if you beat us there, just ask the staff to direct you to the giant table at which people are expected to watch the Knicks game. I think they'll be expecting us.

That is all! There will be a game thread up later for those of you who can't join the LIVE GAME THREAD, and I'll be back later on (possibly tomorrow...or never) to recap what I can remember from the game and the get-together. I look forward to groping some of you tonight.