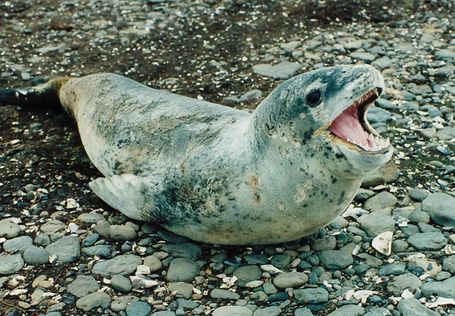 Good afternoon, poo-butts. I hope everybody's having a splendid Tuesday. Treat yourself to an after lunch snack if you haven't already. You deserve it.

Before the Knicks face off against the Bucks tonight, let there be links.

- According to Wikipedia, leopard seals have been known to "play" with penguins. They've also been known to "eat" penguins, so if you're a penguin, please approach with caution.

- With David Lee returning to the Garden on Wednesday, all the newspapers are abuzz with what was and what could have been. Here's an example. Here's another.

- Coach Nick's breakdown of Knicks-Sixers covers a lot, but what got me most were a few instances in which Raymond Felton (and Toney Douglas, on that one ducked screen) played terrible, terrible defense against the Sixers backcourt. The team-wide lethargy down the stretch is evident in the replay, but particularly in Felton's case.

- This doesn't mention the Knicks at all, but Joey Litman's illustration of point guard attack mechanisms at FreeDarko is artful and brilliant. (You could make a pretty funny one of these for Chris Duhon). By the way, I'm nearly done with the new FD book and will be reviewing it soon.

- My SBN friends labeled the Knicks a "bad team", which is good for...sixth-best in the Eastern Conference. Hooray for mediocre competition!

- Tommy Dee on the finer points of the Knicks' pick-and-roll. The timing, positioning, and degree of actual contact are all things to look out for when the Knicks are running (what should be) their bread-and-butter play.

- I love The Onion. (Pretty sure I found that because Howard Beck twat it.)

- We close with the most interesting tidbit of the day. Steve Adamek twat it:

Amar'e also living in "one of" David Lee's apartments in WPlains, so Lee's his landlord. No calls betw, the 2 about bathroom issues, though

David Lee is Amar'e Stoudemire's landlord. I don't know what to do with this information.

Tipoff's at 8! There will be a game thread up before then. Finish your school/work/lazy day with a bang, and get ready to tangle with the Bucks.