Ranking Raymond Felton by the numbers

Share All sharing options for: Ranking Raymond Felton by the numbers

There's a lot of credit to be handed out when a team wins 12 of its last 13 games. Most of it rightfully goes to Amar'e Stoudemire who's absolutely Stoudemizing opposing defenses and putting the Knicks on his back to close out games. But he knows he's not the only reason behind the Knicks' winning play and constantly calls his own franchise record-tying scoring streak a "team success".

And that's where Raymond Felton has recently gotten his due from several basketball scribes. When you average 18.6 points and 8.5 assists per game, it's hard to overlook your role in the fifth best offense in the league. So while the numbers are great, and on par with what we assumed they'd be under Mike D'Antoni, let's quickly put them into perspective and see where he ranks among the best in the league this season. 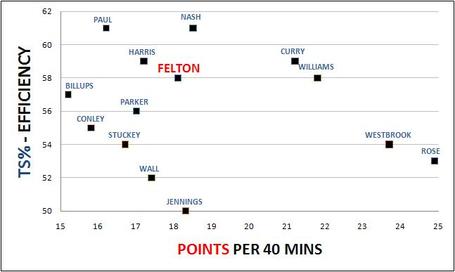 When you account for pace - because some teams don't have as many possessions to score when they walk the ball up the floor (like Felton last year, in fact) - Felton is 7th among point guards in scoring. That's damn good considering this is the era of absurd point guard play, but notice how efficiently he's doing it. Adding true shooting percentage into the equation, you see that only three point guards are scoring more points as efficiently as the Knicks' guard right now. Two of them, Steve Nash and Stephen Curry, are known for their pure strokes and one, Deron Williams, is pretty much the best in the game depending on who you ask. 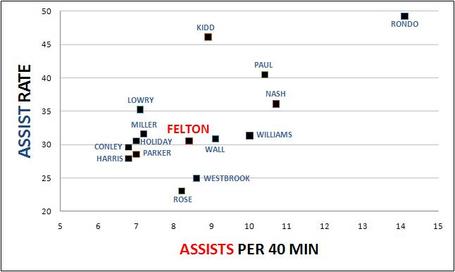 First off, stop it, Rajon Rondo. Second, Felton also ranks favorably when it comes to passing (again, accounting for pace), coming in 8th among his peers in assists. And looking at assist rate (the percentage of possessions ending in an assist), aside from the otherworldly talent of John Wall, Felton only trails other point guards we already knew were much better passers.

So after an off-season of if's - "if Felton can average this and that", "if Felton can play the pick and roll with Amare", "if Felton can keep hitting threes"  - what the Knicks have is a point guard in the top ten of both scoring and passing at his position.

Admittedly, this is surprising because I'm more pessimistic than most about players living up to expectations. So far though, Raymond Felton is serving as a prime example of someone performing at his best when used the right way.

(Stats provided by DraftExpress and HoopData)