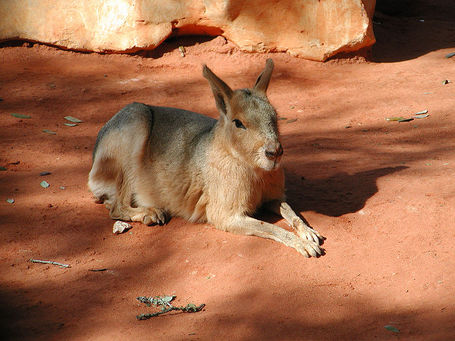 Good afternoon, young hoppers. The Knicks have another day to practice in preparation for their match-up with the Celtics. While we wait, let's check the links.

- Maras are a species of cavy found in Patagonia and other parts of South America. Their appearance is best described as "guinea pigdog".

- Jonathan Abrams of the Times dissects the post-separation numbers of both Amar'e Stoudemire and Steve Nash.

- KenPaDre has an interesting solution to the Knicks' backcourt hole.

- The Knicks were asked who the best comedian on the team is. Two front-runners emerged, with one especially bully Knick emerging victorious.

- Amar'e Stoudemire's dominance during the eight crazy nights of Hannukah would be easier to laugh off if the rest of the league's Jews weren't also taking part. (Thanks to Gianny Cash for that one.)

- According to the Knicks, Eddy Curry did not practice today because he has a cold. Do what you will with that information.

- My friend Jay King told me that Shaq might not play for the Celtics tomorrow.

- The Knicks' recent winning streak has been unlikely, but not the unlikeliest.

That's all for now. Have splendid days and be careful where you step. The earth is covered in ice and animal poop.