Share All sharing options for: Danilo Gallinari Drives on the Orlando Magic Defense

When going over Miami's pick-and-roll defense, I touched on (really just grazed on) Danilo Gallinari's need to drive to the basket when defenses close out on his threes. It's a good way for him to vary his game and get to the line with greater frequency. Little did I know that Gallo reads P&T and decided to take my advice for last night's game against the Magic. 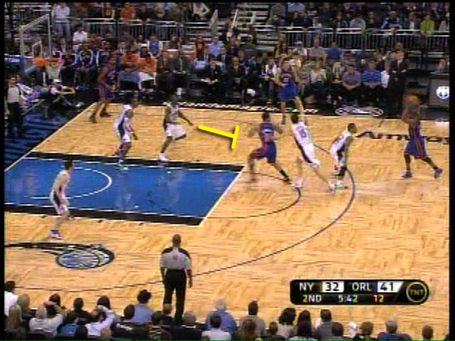 On this possession you see a PnR between Raymond Felton and Wilson Chandler. As Chandler rolls, Jason Richardson cheats off Gallo to pick up Chandler. Notice how Hedo Turkoglu has his hand in the passing lane as well making this a difficult pass for Felton. 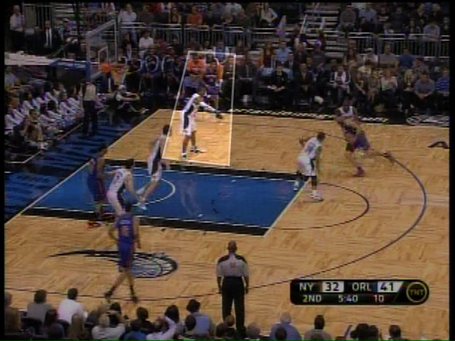 The pass comes out to Gallo on the wing. When he makes his move after Richardson closes, Dwight Howard directs his defense to pick up Gallo on the drive because he has to stay with Shawne Williams. The threat of the corner poop neutralizes him.

The result is a pair of free throws. 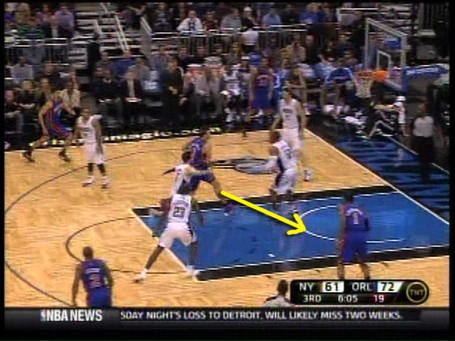 I have a problem a with a few things on this possession. Gallo can score in three fashions here: he can catch and shoot over a much smaller J.J. Redick, drive and pull-up over Howard, or draw contact on a shot over Howard. He opts to pass to Amar'e Stoudemire but you see that the luxury of Howard manning the middle allows Redick to come off Gallo and interrupt the passing lane.

Stoudemire provides some always-valuable blogosphere lolz with the blown dunk but you're left wondering how many points were left on the table. 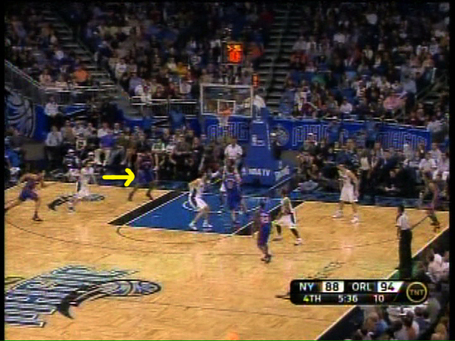 Gallo drives on Turkoglu on this play but the outcome is similar. Again, Howard compensates for the penetration and steps up on the drive. From this angle you almost want Gallinari to throw it up for an alley-poop until you realize that it's Williams on the receiving end instead of Amar'e.

Redick gets his hand on the pass again and, this time, forces a turnover which leads to a fastbreak for the Magic.

Here are some more clips of Gallo driving to the basket with good results. The first clip is on a fastbreak where the Magic naturally had difficulty picking up their men which resulted in a wide open attempt for Felton (air balled it but he was open). He opts to dump it off to Stoudemire on the second clip - rarely a bad decision -  who earns two of his nine trips to the line. On the third, Gallo splits defenders and earns himself a some more gratis throws. Three plays, all different, all positive.

Gallinari averages five attempts behind the arc per game. It's frustrating as it is necessary, which could be said of Gallo in general. Last night against the Magic, he only attempted one three and aggressively drove to the basket instead. As evidenced by these clips, the results were mostly positive. Remember, most teams don't have Dwight Howard striking fear in the paint and Redick is damn aware of his responsibilities on defense. The Magic are fourth in points allowed per possession because of it. Against other teams, these possessions could very well have ended in more dunks for Amar'e. Regardless, you have to hope for more of this kind of play from Gallo. He attempted more free throws than shots (7 to 5 respectively) but you see how this aggression would be beneficial to the offense. It rounds out his game as an inside/outside threat.