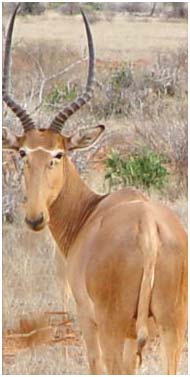 G'dafternoon, warlocks. I hope you, you, and even you are having pleasant Tuesdays. If y'all wanna see some links, let me hear you SCREEEEEAM!

- Hirolas are big-ass antelopes with big-ass preorbital glands. So big, in fact, that they kind of look like another set of eyes. Hirolas' natural habitat is in Las Vegas casinos, where they get comped suites and personal attendants.

- If you saw how hard I made myself laugh in that last bullet, you would probably call the police.

- Today's a busy day for me. While Will Leitch and Joe DeLessio take days off, I've taken up residence at the New York Magazine Sports Section blog as a guest editor. It's somewhat terrifying, but my first two posts have gone up with minimal casualties. I recapped the Knicks-Wolves game this morning, and there should be at least one more Knicks-friendly post later this afternoon.

- In his most recent Fix (free for the time being!) Alan Hahn examines the Knicks' small lineup and also mentions that the Knicks might be looking for bigs, not smalls, on the open market:

And the Knicks are going to need more size, as well, and that's why, if you talk with anyone inside the Knicks braintrust -- all the scouts are in town for meetings as the trade front begins to see action -- they'll tell you the team's putting more emphasis on looking for size to bolster the front line more than they're in the market for a backup point guard.

- Marc Berman has more on the scout summit mentioned above by Hahn. Among those in attendance are Kevin Pritchard and Warren LeGarie. Curious.

- Tommy Dee identifies Jeff Green as someone that might warrant the Knicks' interest in the near future.

- Here at SBN, Jeff Freier puts the Knicks at the forefront of New York's city-wide quest for a winning sports culture.

He's right, methinks. Whatever the case, Amar'e's been showing up in fourth quarters, when the Knicks need him most.

That's all for now, children. Enjoy your fine selves.