I'm here to feed you guys part two of "Playbook Pilfering," so you'd better be hungry. For this edition, I scoured the Knicks most recent travesty of a dingleberry overtime loss to take a play out of Paul Westphal's book. Man, when I was looking through that book, I seen some shit! But what I found out will shock and amaze; it'll astound and compound everything you already assumed to be true. For the secret of all secrets, jump!

So what I'm going to do is take their first successful possession of the game, which was disguised as a designed play despite several obvious factors (the key man of the play wasn't even paying attention to the man he's supposed to screen, etc.). Either way, if it were to be a designed play, the Knicks could potentially run it and make it look pretty as shit. Let's get into it.

I decided on using the players of my choice for this play, mainly because I hate Chris Duhon. 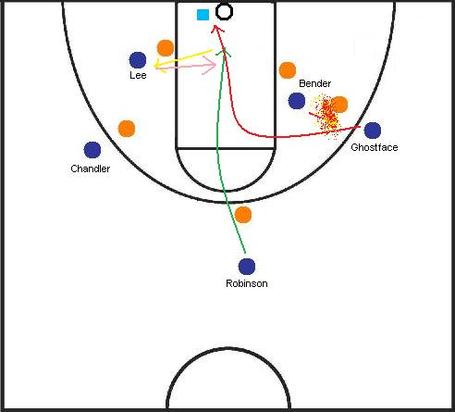 This diagram is slightly convoluted.

Soooo, Nate Robinson starts with the ball at the top of the key with Wilson Chandler to his left and Ghostface Douglas to his right, both on the three-point line. To the left of the paint is David Lee, fighting for position. To the right of the paint is Legs Bender, just kinda chillin' (but just you wait, he won't be chillin' for long!).

First action is for Nate to drive all the way toward the cup to get the defense to collapse on him. Although Nate is no Tryeke Evans (this time in three years, we might be saying that about everyone except for 1 or 2 guys), he can certainly hop and pop his way to the rim. When he gets his ass into the paint, he kicks it the ten or so feet to his left to David Lee, who immediately starts posturing like he's going to take his man off the dribble. When Lee gets the ball, the weakside action begins, with Bender stepping up several feet to pick Ghostface's man.

This is easily the most difficult part of the play, as the pick needs to be set absolutely perfectly in order for Ghostface to get around and drive his way (without the ball) into the paint as Lee holds onto the rock and waits for him. Bender is the guy I chose for this play simply by virtue of size; he is the biggest guy on the team. I suppose Jared Jeffries or Jordan Hill could step in for him, but I feel as though they're too thin and don't have enough YOPRATTNTHPAOAP (Years Of Pretend Retirement And Therefore The Need To Hit People As Often As Possible) to set a mean, douchebag pick (the type that rightfully pisses people off during casual pick-up games) that will stop Ghostface's defender in his tracks. Under absolutely no circumstance should the defender be able to fight his way through the pick; that's the bottom line.

Alright, now that I've ranted about the pick (which I've indicated with a poorly-rendered explosion in the illustration), we can move on. Ghostface shoots to the free-throw line and darts his way down the paint and receives the pass from Lee for an easy lay-up or, if he's feeling particularly Fishscale, slamma-jamma. Now let's recap numerically:

2 - Points for the Knicks

So that about wraps it up! For the Kings, the play began as "give the ball to Tyreke Evans and get the fuck out of the way," and resulted in an accidental thing of beauty. Although I should clarify: no Knicks defender was actually harmed in the process; the player who set the screen did so purely by accident (he was justifiably astonished Tyreke didn't get to the cup); he just so happened to be standing in exactly the right place at exactly the right time; that's a lot of ;semicolons;right;?